For the second time in two weeks, the United States has deployed two aircraft carriers to the South China Sea, the U.S. Navy said on Friday, as China and the United States accuse each other of stoking tensions in the region 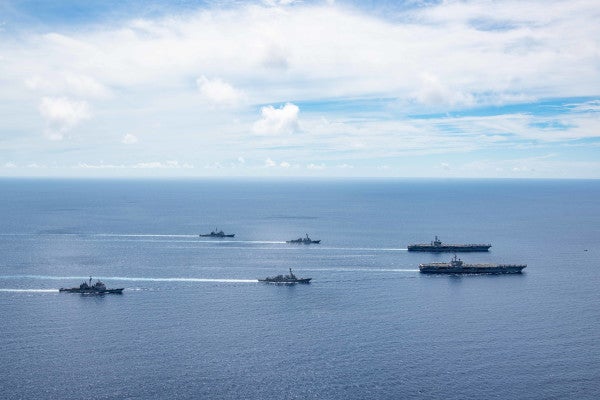 HANOI (Reuters) – For the second time in two weeks, the United States has deployed two aircraft carriers to the South China Sea, the U.S. Navy said on Friday, as China and the United States accuse each other of stoking tensions in the region.

The USS Nimitz and USS Ronald Reagan carried out operations and military exercises in the contested waterway between July 4 and July 6, and returned to the region on Friday, according to a U.S. Navy statement.

“Nimitz and Reagan Carrier Strike Groups are operating in the South China Sea, wherever international law allows, to reinforce our commitment to a free and open Indo-Pacific, a rules based international order, and to our allies and partners in the region,” Rear Admiral Jim Kirk, commander of the Nimitz, said in the statement.

The presence of the carriers was not in response to political or world events, the statement added, but relations between Washington and Beijing are currently strained over everything from the new coronavirus to trade to Hong Kong.

Heated rhetoric has been on the rise in the region, where Brunei, Malaysia, the Philippines, Taiwan and Vietnam challenge China's claim to about 90% of the sea.

China held military drills in the sea earlier this month, drawing strong condemnation from both Vietnam and the Philippines, at the same time as the two carriers first crossed the waterway for what the U.S. Navy said were pre-planned exercises.

The U.S. Navy says its carriers have long carried out exercises in the Western Pacific, including in the South China Sea, which extends for some 1,500 km (900 miles). At one point recently, the United States had three carriers in the region.

About $3 trillion of trade passes through the South China Sea each year. The United States accuses China of trying to intimidate Asian neighbors who might want to exploit its extensive oil and gas reserves.

Related: The Navy is on a mission to troll Beijing out of the South China Sea