The U.S. and British navies sailed into the Barents Sea to conduct maritime security operations in the Arctic Ocean, U.S. Naval Forces Europe-Africa said in a release Monday 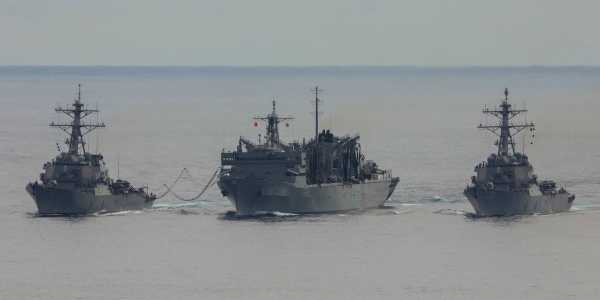 The U.S. and British navies sailed into the Barents Sea to conduct maritime security operations in the Arctic Ocean, U.S. Naval Forces Europe-Africa said in a release Monday.

The Barents, part of the Arctic Ocean, is north of Norway and Russia. Russia's Northern Fleet, which maintains the country's naval strategic nuclear forces, has its headquarters at Severomorsk on the Barents.

The U.S. Navy said its surface ships haven't operated in the Barents since the mid-1980s and that it notified Russia's Ministry of Defense of the operation on May 1 “to avoid misperceptions, reduce risk, and prevent inadvertent escalation.”

Russia said at noon in Moscow on Monday that its Northern Fleet had begun monitoring the US and British ships, which it said entered the Barents Sea at 7 a.m. in Moscow, or midnight on the US East Coast.

The exercise comes amid heightened tensions with Russia after its 2014 seizure of Crimea and intervention in Ukraine.

“In these challenging times, it is more important than ever that we maintain our steady drumbeat of operations across the European theater, while taking prudent measures to protect the health of our force,” Vice Adm. Lisa Franchetti, head of the U.S. Navy's 6th Fleet, said in the release.

On May 1, HMS Kent partnered with USS Donald Cook, USS Porter, USNS Supply, a US Navy submarine, and a U.S. Navy P8-A Poseidon aircraft for an anti-submarine exercise above the Arctic Circle in the Norwegian Sea.

Some 1,200 U.S. and British sailors took part in the exercise, testing “the crews in high-end training while enhancing regional stability and security,” U.S. Naval Forces Europe-Africa said in a release.

“The challenges of working in this extreme environment should not be underestimated, but HMS Kent's presence here continues to demonstrate the UK's commitment to the North Atlantic and high north,” Cmdr. Matt Sykes, commanding officer of the Kent, said in a release.

The Arctic has been an area of renewed attention for NATO amid tensions with Russia. The U.S. Navy has been spending more time there to gain experience with the unique challenges it poses to naval operations.

NATO conducted exercise Trident Juncture, the first of its kind in decades, in late 2018. Focusing on Arctic warfare, Trident Juncture saw the first U.S. aircraft carrier to sail above the Arctic Circle since the 1990s.

Other U.S. Navy ships, including USS Donald Cook, have sailed into the Arctic since, and in September, the Navy's recently reestablished 2nd Fleet sent personnel to Iceland to practice command and control of warships in the Arctic.

The Norwegian Sea has particular strategic importance, as Russian ships sailing from the Arctic to the Atlantic would pass through it and what's known as the Greenland-Iceland-UK Gap, which NATO monitored during the Cold War.

“Allied and partner navies must remain proficient in all operating environments to ensure the continued security and access to the seas,” the Navy said in the release announcing the Barents Sea exercise.

'They're not as good as us'

Russia has spent more than a decade rebuilding its navy, which deteriorated after the Cold War, though it remains smaller than its Soviet predecessor.

Adm. James Foggo, head of U.S. Naval Forces Europe-Africa, has warned repeatedly about Russia's increasing naval activity, describing rising tension at sea as the “fourth battle of the Atlantic,” after the world wars and the Cold War.

Foggo, a submarine officer by training, has pointed to increasingly sophisticated Russian submarines as a concern, citing their new ability to launch missiles as a potential threat to European cities and infrastructure.

“The Russians are operating first-rate submarines, but let there be no doubt … we still have the competitive advantage in the undersea domain,” Foggo said at the U.S. Naval Institute's annual meeting on April 30.

Foggo said his command was seeing increasing operations by Russian ships and subs, “particularly in the Black Sea and the Eastern Mediterranean.”

“The Russians have realized that there is an asymmetric advantage in the undersea domain, and they're putting a lot of resources into it,” Foggo said. “They're pretty good, but they're not as good as us.”

The U.S. Navy and its NATO counterparts have also been spending more time on anti-submarine warfare, known as ASW, a capability that many of those forces let wither after the Cold War.

“One of the greatest things that happened when I was here as the 6th Fleet commander is they brought out the new P-8 Poseidon aircraft. That is the Cadillac of anti-submarine warfare, and we've got about six of those aircraft flying all over the theater all the time,” Foggo said Thursday.

The P-8A entered service with the U.S. Navy in 2013 and has been sold to the UK and Norway, among others. Poseidons can scan above and below the ocean using an array of sophisticated sensors as well as air-dropped sonobuoys.

P-8s carry torpedoes and anti-ship missiles, and the Navy is considering equipping it with other weapons. The Pentagon's Inspector General also wants to make sure the P-8 is suited for its mission, announcing in mid-April that it would review the aircraft to make sure it “meets the anti-submarine warfare requirements of U.S. European Command.”

Foggo on Thursday emphasized that ASW can't be done by just one platform or force.

“It can't just be a single element of the air arm or the surface Navy or the submarine force that's conducting this battle,” Foggo said. “ASW is a team sport, and we've all got to work together, along with the intelligence communities and along with reach-back to the United States.”