The Navy Is Doing Away With Traditional Ratings For ‘Seamen’ 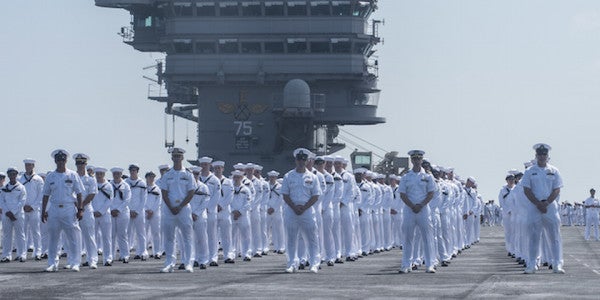 The Navy is jettisoning its complex ratings system to make sailors' jobs more understandable and allow them to more easily transfer occupations.

The move, which allows sailors to be addressed by rank, such as seaman, petty officer and chief, aligns the service for the first time with the other three military branches, which address troops by rank instead of job specialty.

“I've never heard of a Marine who introduced himself as 'Infantry Corporal Smith,'” Cmdr. John Schofield, a spokesman for Navy Personnel Command, told Military.com. “This is exactly what every other service does; it completely aligns us with the other services. I would just say that it makes complete sense in terms of putting more emphasis on rank and standardization.”

Related: The Naval Academy May Have To Stop Calling Students ‘Midshipmen’ »

The changes are the result of an eight-month review initiated by Navy Secretary Ray Mabus in January in as part of an effort to make job titles gender neutral as women entered previously closed fields.

In June, Chief of Naval Personnel Vice Adm. Robert Burke announced that the review was being expanded with input from the master chief petty officer of the Navy and other senior leaders to examine ways to make job descriptions more inclusive, improve the job assignment process, and facilitate sailors' transition between military jobs or into civilian ones.

A Navy administrative message published Thursday announced that the ratings system that included job and rank information — intelligence specialist first class or chief hospital corpsman — is being replaced with a four-digit alphanumeric Naval Occupational Specialty, or NOS, parallel to the military occupational specialties used by the Marine Corps, Army and Air Force.

“There will no longer be a distinction between 'Airman, Fireman, and Seaman.' They will all be 'Seamen,' ” the message states.

The new NOSs will be categorized under logical job fields, similar to the organizational system used by the other services. According to a ratings conversion chart provided by Navy officials, the old ratings of Navy diver, explosive ordnance disposal specialist, and special warfare operator will be classified as NOS E100, E200 and E300, respectively.

Schofield said sailors will be able to hold more than one NOS, a shift that will allow them to collect a broader range of professional experience and expertise while in uniform. Each NOS, he said, will be ultimately matched with a parallel or similar civilian occupation to “enable the Navy to identify credentials and certifications recognized and valued within the civilian workforce.”

“This change represents a significant cultural shift and it is recognized that it will not happen overnight, but will take time to become fully adapted,” the message states.

While the review began with an eye to gender neutrality, the ranks of “seaman” in the Navy and “midshipman” at the Naval Academy will stay, Schofield said. The terms were allowed to remain, he said, because they are ranks, not job titles.

While the new NOSs will largely retain the original ratings titles, some — such as yeoman — may change to become more inclusive or more descriptive of the sailors' jobs. The updated list of job titles is still being finalized, Schofield said.

The Navy's message to sailors is that the process isn't over yet, and it's not setting timelines for the completion of the ratings changeover.

“Changes to personnel management processes, policies, programs and systems will proceed in deliberate and thoughtful phases that will enable transitions that are seamless and largely transparent to the fleet,” the message states. “Fleet involvement and feedback will be solicited during each phase of the transformation. All aspects of enlisted force management to include recruiting, detailing, advancements, training, and personnel and pay processes are being carefully considered as we move forward.”