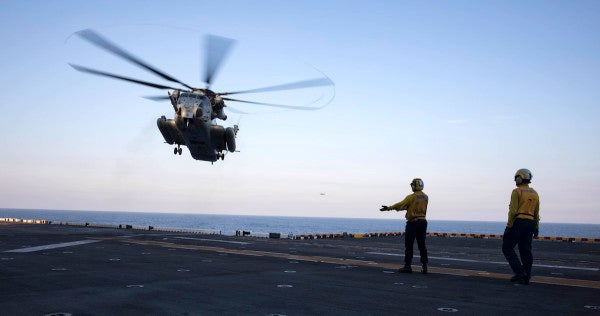 The Norfolk-based amphibious assault ship USS Bataan and a locally-based helicopter squadron have been providing assistance to the hurricane-ravaged Bahamas for days, according to Navy photos posted on social media.

The posts provide the first glimpse into the U.S. Navy's response to the hurricane more than a week after the Category 5 storm slammed into the Bahamas, killing 43 as the storm slowly moved across the island chain.

U.S. Northern Command, which is overseeing the military response in the Bahamas in coordination with the U.S. Office of Foreign Disaster Assistance, said late Monday the command has received 30 requests for military support from the office.

So far, that has not included a request for medical support that could be provided by the Norfolk-based hospital ship USNS Comfort, which is providing humanitarian relief elsewhere in Latin America, according to Northern Command spokesman Bill Lewis.

But social media posts show the Bataan has 20 people from Naval Medical Center Portsmouth on board to help out with disaster relief.

On Monday, the naval hospital posted on Facebook that its Casualty Receiving and Treatment Ship members used a helicopter from the Bataan to evacuate a severely injured five-year-old in Nassau, Bahamas.

The Bataan also helped out in the wake of the storm when four Marine MV-22 Ospreys that were on board were dispatched to Florida on Sept. 4 to pick up an Air Force Airfield Assessment Team and take them to the Bahamas, Lewis said.

When the storm hit, the Bataan Amphibious Ready Group was already out to sea conducting exercises with the 26th Marine Expeditionary Unit.

In a memo sent Saturday evening to the offices of U.S. senators, the Defense Department said that the airfield assessment team had completed its evaluation of Grand Bahama International Airport in Freeport and that it now has the capability to accept inbound C-130 and C-17 aircraft.

The team also went to Marsh Harbor on Abaco Island and completed an assessment for a base of operations for an urban search and rescue team from Fairfax County, the memo said.

Helicopter Mine Countermeasures Squadron 14 posted photos on Facebook of the squadron at Homestead Air Reserve Base, Fla., which is south of Miami.

“We have flown multiple missions to the Bahamas and will continue to provide assistance over the coming days,” the squadron said in a post on Monday.

U.S. Northern Command posted a picture on Facebook on Sunday showing an all-terrain vehicle being loaded onto a Sea Dragon in Florida.

The post said the ATV would be used to aid in navigating rugged terrain during assessments and site surveys in the Bahamas.

The U.S. Office for Disaster Assistance also posted on Twitter on Sunday that the Navy has transported 80 response staff and nearly 31 metric tons of supplies to help with search efforts. The post featured a Navy helicopter.

On Monday, another post that showed pictures of a helicopter from Mine Countermeasures Squadron 14 said U.S. Northern Command had delivered 72 metric tons of relief supplies and search equipment as well as 183 responders and four dogs. The United Kingdom, meanwhile, has sent the Royal Fleet Auxiliary ship Mounts Bay to provide humanitarian relief.

The Royal Navy said the U.S. Coast Guard has been using the Mounts Bay to refuel its helicopters and that a team of 18 military medical staff have arrived to provide emergency and intensive care, as well as surgery, to those in need.