Navy, Pentagon to review base security procedures following 3 deadly incidents in one week

The Navy pledged Friday to find ways to upgrade security procedures and prevent future attacks following two shootings and a fatal gate runner incident at naval bases in Virginia, Hawaii and Florida in the last week 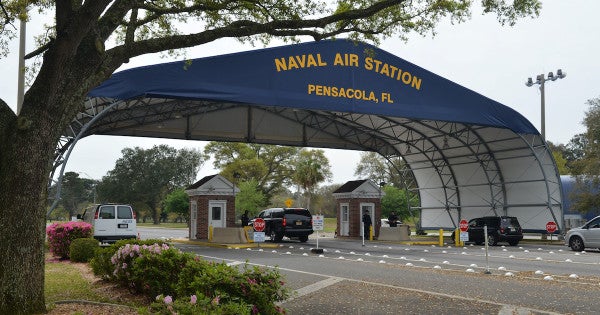 The Navy pledged Friday to find ways to upgrade security procedures and prevent future attacks following two shootings and a fatal gate runner incident at naval bases in Virginia, Hawaii and Florida in the last week.

Defense Secretary Mark Esper also announced he is “considering several steps to ensure the security of our military installations and the safety of our service members and their families,” although he did not give details.

Investigations are underway by the Defense Department, FBI and State Department, as well as local and state officials in Florida, into the shootings at Naval Air Station Pensacola early Friday, allegedly committed by a Saudi national pilot in training, officials said.

“These acts are crimes against all of us,” Acting Navy Secretary Thomas Modly said of the incidents, which began Nov. 30 at Joint Expeditionary Base Little Creek-Fort Story in Virginia when Master-at-Arms 3rd Class Oscar Temores, 23, was killed when his patrol car was struck by a gate runner.

On Wednesday, a sailor identified as 22-year-old Gabriel Romero allegedly shot to death two civilian workers at the shipyard at Joint Base Pearl Harbor-Hickam before taking his own life.

In a statement, Modly said it is the “solemn duty” of the service to carry out a review to determine the causes of the three incidents and “work together to prevent them.”

The incident at Pensacola was possibly the most concerning from a security perspective as it involved a Saudi national in the kingdom's Air Force who was training with other foreign nationals at the base in Florida's Panhandle.

“There's obviously going to be a lot of questions about this individual being a foreign national, being a part of the Saudi Air Force and then to be here training on our soil,” Florida Gov. Ron DeSantis said at a base news conference.

“Obviously, the government of Saudi Arabia needs to make things better for these victims,” he added.

At the White House, President Donald Trump said that Saudi King Salman Abdulaziz al-Saud had called to express his condolences and give assurances that the shooter did not represent the Saudi people.

“The King said that the Saudi people are greatly angered by the barbaric actions of the shooter, and that this person in no way shape or form represents the feelings of the Saudi people who love the American people,” Trump said in a tweet.

At the Pensacola news conference, Escambia County Sheriff David Morgan said his office got the call at about 6:50 a.m. to respond to shootings in a classroom on the base. Three people were killed and eight more wounded or injured, including two sheriff's deputies, before the shooter was killed by a deputy, officials said.

Morgan said the shooter used a handgun, and a main focus of the investigations will be how the foreign national obtained the weapon and managed to get it on base.

Capt. Timothy Kinsella, the base commander, said personal weapons are not allowed on the base. “You can't bring a weapon on base unless you're part of the security forces,” he said.

Since World War II, Pensacola has served as a flight training base for service members from allies and partner nations. The Navy could not immediately give a breakdown for how many foreign nationals are currently training at the base.

Local officials and the Navy would not immediately describe the Pensacola shootings as a terrorist act, but Florida Sen. Rick Scott, a Republican, said it may have been.

“We can safely call this an act of terrorism, not an act of workplace violence,” Gaetz told local TV station WEAR.