"We know it's a hot topic, we know many of you want it...I'll be quite honest with you, I get it even within my family from some service members." 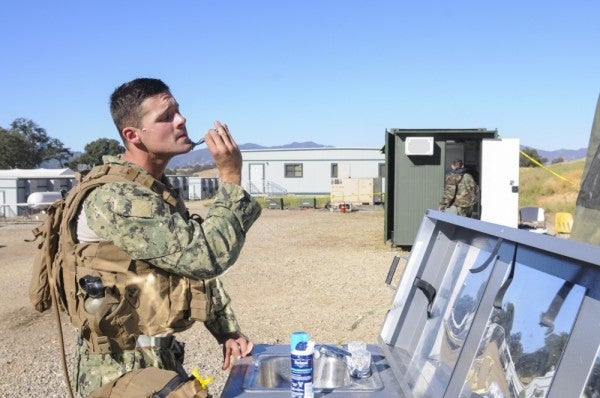 Editor's note: This article by Gina Harkins originally appeared on Military.com, a leading source of news for the military and veteran community.

Sailors might someday be able to get a jump start on the popular veteran-beard look.

The Navy's top personnel leaders said Tuesday that they're open to considering allowing sailors to sport beards, at least when they're not at sea.

“We're getting a lot of feedback from sailors, we're talking to senior leaders and it's not a dead issue,” Fleet Master Chief Wes Koshoffer with Manpower, Personnel, Training and Education said during a Facebook live event.

While the grooming standard is not under formal review, Chief of Naval Personnel Vice Adm. John Nowell said they're willing to consider allowing beards ashore in the future. Beards have been banned in the Navy since 1984.

“We know it's a hot topic, we know many of you want it,” Nowell said. “And I'll be quite honest with you, I get it even within my family from some service members.”

Navy leaders announced last month that the service would be ending permanent shaving waivers for sailors who struggle with razor bumps. Nowell stood by that decision, citing safety studies the service has done that show any amount of facial hair can compromise the seal on oxygen breathing apparatuses.

But he assured sailors that no one will be kicked out over pseudofolliculitis barbae, which leads to inflammation that makes shaving daily tough on some men's skin.

“That's a medical issue — you don't choose to have that, and we get that,” Nowell said. “We're going to make sure that if you have that, we work with you to go ahead and get your medical treatments.”

Those treatments range from special creams to special razors to even laser procedures.

“We're not going to kick anybody out,” Nowell added.

Enforcing the same standards ashore is a matter of uniformity, good order and discipline, and looking sharp, Nowell said. But both leaders acknowledged that beards aren't likely to create the same safety concerns ashore.

Nowell invited sailors to join a bimonthly uniform focus group if they want to make the case for beards. He warned sailors, though, against arguing that beards should be allowed because women can wear ponytails.

“I have to be honest, it drives me crazy when a sailor says, 'You gave women ponytails and different fingernail polish. Why won't you give me beards?'” he said. “That's not the argument you use with me to go ahead and start that discussion. … It's not a quid pro quo.”