Editor’s note: This article by Gina Harkins originally appeared on Military.com, a leading source of news for the military and... 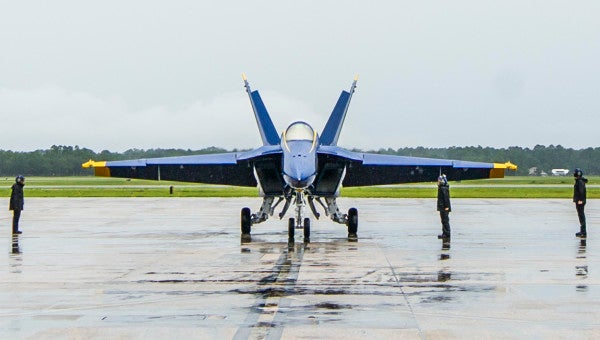 After more than three decades in legacy Hornet jets, the Blue Angels got a big upgrade this week.

The Blue Angels are replacing their aging F/A-18C/D aircraft with 11 new Super Hornets by 2021, in time for the demonstration team's 75th anniversary. The squadron has been flying Hornets for 34 years.

“Acquiring our first Super Hornet is a momentous step in our inevitable transition, scheduled for later this year, and it required a Herculean effort to get these fleet jets ready for our team,” Cmdr. Brian Kesselring, the Blue Angels' commanding officer and flight leader, said in a statement.

The Navy awarded Boeing Co. a $17 million contract in 2018 to convert nine F/A-18Es and two F/A-18Fs into Blue Angels-configured jets. That not only includes the famous blue and gold paint job, but also the removal of some items, such as the nose-mounted cannon used in Super Hornet strike operations. The contract also called for installing items not standard on other Super Hornets, like the air show smoke system that helps onlookers spot the jets during performances, The War Zone reported.

Super Hornets are bigger than the legacy models. The new aircraft are more 4 feet longer, almost a foot taller, and have a wingspan of about 45 feet, compared to the roughly 40-foot span on the legacy jets.

They're also more powerful and can stay in the air longer than Hornets.

All of that will give spectators a better show, Cmdr. Frank Weisser, a former Blue Angels member who helped oversee the switch to Super Hornets, told the Pensacola News Journal last year.

“[We] believe that our maneuvering will be more visible to the crowd and more impressive overall,” Weisser said. “That increased performance will also allow us to alter some maneuvers to better showcase the aircraft's very unique capabilities.”