A U.S. Navy boat washed up off the coast of Ireland and caused quite a stir, and spawned a few conspiracy theories, one of which involved the U.S. military spying on the Irish. 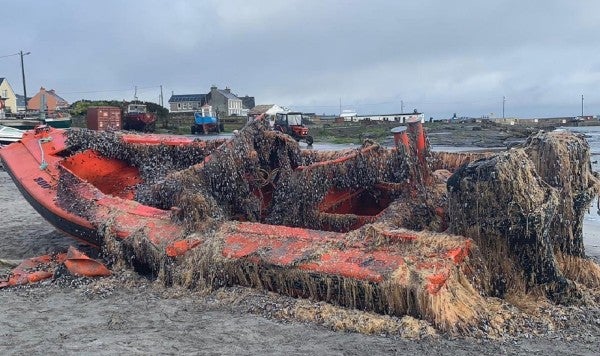 Crew members of western Ireland's Doolin Ferry Co. were headed to Inis Oirr, a small island in Galway Bay, on Monday afternoon when they spotted something bright orange floating in the water.

“First I had a feeling of fear, (wondering) if there was people in difficulty 'cause we could only see about a meter of the bow sticking out of the water,” Tom Noel, one of the crew members, said in an email to The Virginian-Pilot Thursday. “Then once we got closer and could see the amount of growth on it, I knew it was a long time in the water and that it was only a danger to navigation.”

Upon investigating, Noel and the rest of the Doolin Express crew found the boat covered in goose barnacles — it had clearly been in the water for awhile — and along with a local fishing boat, towed the boat to the beach at Inis Oirr, where many islanders helped pull it ashore.

A day later, Doolin Ferry Co., which is based near Ireland's famed Cliffs of Moher, posted the account on Facebook. At that point they guessed the boat was a U.S. Coast Guard rescue boat, but were hoping for any details on what brought it so far. The post blew up online.

“We couldn't have predicted the interest from the public that there has been in this boat,” Liam O'Brien, the ferry company's owner, later said in a news release. “There was a lot of growth on it, it had clearly been there for a long time. We already have a shipwreck on the island, so everyone's saying this is the new one. This is definitely the most unusual thing we have discovered and it's drawing in lots of tourists to the area.”

News outlets across Ireland picked up the mystery. Thousands of people shared their theories on social media. Was it a drug-running boat masqueraded as law enforcement? Was it an American military vessel used to spy on the Irish?

Within a day the answer came. A representative for Silver Ships Inc., an Alabama-based shipbuilding company, confirmed it had manufactured the boat in 2015 for the U.S. Navy, the ferry company's Siobhan Nolan said in an email.

It's a High Speed Maneuverable Surface Target that can be used remotely and is used as target practice by the Navy.

“We believe the boat originated in Norfolk Virginia,” Doolin Ferry Co. wrote on its website. “It's likely that it was lost during a training exercise and it remained in the water drifting until it ended up in the water close to Inis Oirr. … How cool is that?!”

Turns out, it's true. Timothy Boulay, a spokesman for the Naval Air Warfare Center, said Thursday that the vessel was lost during a missile test and evaluation event off the coast of Norfolk last September.

After realizing the target was lost, the Atlantic Target and Maritime Operations team searched for five hours but couldn't find it and notified the Coast Guard of the potential navigation hazard.

Is it shocking the boat made it across the Atlantic? Not very, Boulay said, because the test vessels are foam-filled so that they don't sink.

“Our people are not surprised it made it to Ireland.”