Search-and-rescue efforts have been called off for three sailors missing after a Navy aircraft went down Wednesday afternoon in the... 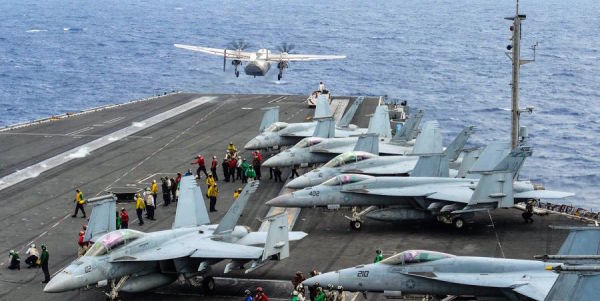 Search-and-rescue efforts have been called off for three sailors missing after a Navy aircraft went down Wednesday afternoon in the Philippine Sea.

The Navy announced the end of the search in a statement Friday morning, saying U.S. and Japanese ships and aircraft covered nearly 1,000 square nautical miles over two days searching for the missing sailors.

“Our thoughts and prayers are with our lost shipmates and their families,” Rear Adm. Marc Dalton, Task Force 70 commander, said in a statement. “As difficult as this is, we are thankful for the rapid and effective response that led to the rescue of eight of our shipmates, and I appreciate the professionalism and dedication shown by all who participated in the search efforts.”

The Navy has contacted the families of the lost sailors, but will withhold their names for 72 hours, as is its policy.

Shortly after Wednesday’s crash, eight people were rescued by Navy Helicopter Sea Combat Squadron 12 and are in good condition aboard the Ronald Reagan, the Navy said.

The Greyhound was carrying passengers and cargo from Marine Corps Air Station Iwakuni to the Ronald Reagan at the time of the accident. It is assigned to Carrier Air Wing 5, the aviation component of carrier’s strike group.

The crash’s cause is unknown. The Yokosuka-based Ronald Reagan was conducting an annual bilateral maritime field-training exercise with the Japan Maritime Self-Defense Force at the time.

The exercise, which was scheduled to run through the weekend, involves 14,000 U.S. personnel, the Navy said. It “is designed to increase the defensive readiness and interoperability of Japanese and American forces through training in air and sea operations.”