Cmdr. John 'Bob' Bowen was fired in January  for filing false position reports to the Navy. 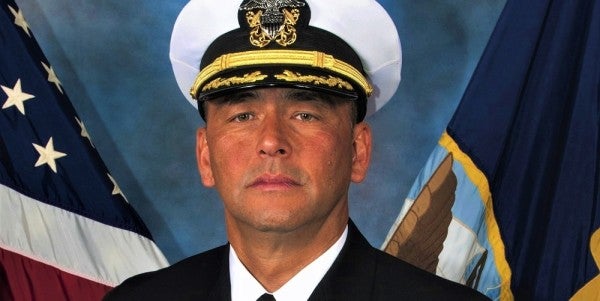 The captain of the San Diego-based guided-missile destroyer Decatur was removed from command in January for filing false position reports to the Navy, according to a Navy investigation recently obtained by the Union-Tribune.

According to the investigation, Cmdr. John “Bob” Bowen, the Decatur’s commanding officer, ordered his crew in September not to report that the ship had gone dead in the water.

The ship had stopped to conduct maintenance on one of its propeller shafts while transiting the eastern Pacific from Hawaii to Seal Beach, California..

In order to hide the four-hour-long stop from the fleet, the crew reported inaccurate ship positions to make it appear as though the vessel never stopped, the investigation said.

To cover up that deception, the investigation said, staff in the ship’s Combat Information Center disabled two electronic systems, called Link 16 and Global Command & Control, to prevent the ship’s true position from being relayed automatically.

Instead the ship falsely reported “dead reckoning” coordinates to the fleet that made it appear the ship had continued on course, the investigation found.

In his interview with investigators, Bowen said he could not recall ordering his crew to turn off electronic trackers or to report false coordinates.

On Sept. 13, the Decatur was cruising at full power about halfway between Hawaii and Seal Beach Naval Weapons Station. About half way between the islands and the California coast, the pitch of the destroyer’s starboard shaft — which connects the engine to the propeller — came out of alignment.

According to the investigation, the ship went dead in the water just after 10 a.m. A bridge watchstander soon called Bowen — who was not on the bridge — to ask if 3rd Fleet, the San Diego-based fleet in charge of the eastern Pacific Ocean, was aware the ship had stopped for repairs.

“No, I don’t think they are aware,” Bowen responded, according to the investigation. When the crew member asked the captain if the fleet should be told, Bowen said not to worry about it, the sailor told investigators.

The sailor remembered Bowen saying that the repairs wouldn’t take long so there was no need to worry about letting the fleet know they’d stopped.

At 11:30 a.m., another sailor assumed the watch on the bridge. This sailor also called Bowen because 3rd Fleet was asking for the ship’s position, course and speed. The sailor recommended to Bowen that he be allowed to tell the fleet the Decatur was dead in the water for maintenance, but the captain again said not to do so, the investigation said.

“After I hung up with the captain, I understood what he was saying,” the sailor told investigators, according to a transcript of an interview. “Basically, (to) provide … where we would have been … as if we were not (dead in the water). It just seemed a little awkward I guess….”

The sailor called Bowen a second time to clarify the captain’s instructions, the sailor told investigators. During that call, he suggested to the captain that they just report to truth to the fleet.

“No, we’re fine,” was Bowen’s response, the sailor said.

The sailor said that a list of coordinates of where the ship would have been had they never stopped was created. The crew used these coordinates — written on a piece of paper — to report the ship’s false position to the fleet until they were back on course as if they’d never stopped, the report said.

“There was this piece of paper where the times and speed were calculated,” said one sailor who told investigators he refused to participate in the ruse. “It was, in my opinion, designed to make it look like we were continuing along our track … when we weren’t.”

By 2:30 p.m, the ship was underway again. It would keep reporting false coordinates to 3rd Fleet until it caught up to where they’d told the fleet they were later that evening, the investigation said.

In his interview with investigators, Bowen said the maintenance was routine and not due to a failure.

He told investigators that as long as the ship didn’t fall more than four hours off schedule, he thought there was no need to notify the fleet.

“I didn’t see the reason to let 3rd Fleet know that we — I mean, as long as we’re not doing anything crazy,” Bowen said, according to a transcript of the interview. “We could still do our mission. I just didn’t want them asking questions about … ‘Hey, why are you guys doing this?'”

Bowen told investigators he told the bridge not to tell the fleet they were dead in the water but denied telling his crew to report false coordinates to the fleet.

“I don’t understand the benefit of not telling them our position,” Bowen told investigators. “OK, we don’t tell them that we’re going (dead in the water) to do a (pitch calibration). OK, that’s fine. But why do we need to falsify our position? That doesn’t make any sense to me.”

The irregularities were reported to the Navy via an anonymous hotline complaint shortly after the ship returned to San Diego. The Navy launched its investigation in November, and Bowen was fired as commanding officer in January.

At the time, the Navy said in a press release that Bowen was relieved of duty due to a “loss of confidence in his ability to command.”

On Friday, Cmdr. John Fage, a 3rd Fleet spokesman, said the Navy holds its leaders to a high standard.

“Their positions require the utmost in responsibility, reliability and leadership, and the Navy holds them accountable in cases where they fall short of those standards,” Fage said.

Bowen’s tenure in command of the Decatur included another headline-grabbing incident.

In October 2018, a Chinese destroyer made what the Navy called “aggressive maneuvers” toward the Decatur near the Gaven Reef in the South China Sea, coming within 45 yards of the Decatur, the Navy said.