Roman Catholic services will continue on board Southern California Naval bases at least for the next year, Rear Adm. Bette Bolivar, the commander of Navy Region Southwest, announced Tuesday, reversing a plan to suspend most contracts for priests in an effort to cut costs 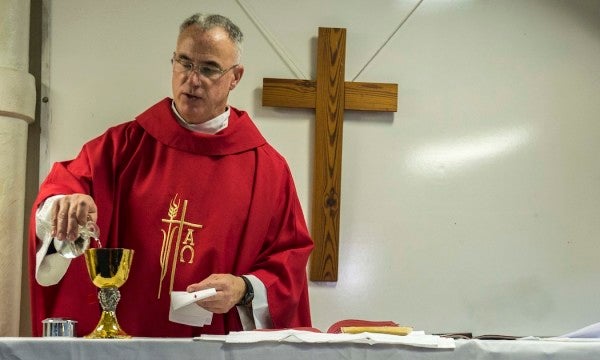 Roman Catholic services will continue on board Southern California Naval bases at least for the next year, Rear Adm. Bette Bolivar, the commander of Navy Region Southwest, announced Tuesday, reversing a plan to suspend most contracts for priests in an effort to cut costs.

That plan, first reported by the Union-Tribune Saturday, would have left base chapels at most installations in San Diego devoid of any Catholic services due to a shortage of priests in the active duty Chaplain Corps. The priests at these installations are civilians and work under contract.

News of the canceled contracts led to a public outcry from religious and political leaders.

“Contrary to previous discussions, this year we will continue contracted religious ministry programs and services similar to what we've had in place previously,” Bolivar said in a statement. “We will also continue to assess how best to meet the needs of our Sailors and their families throughout the region.”

Rev. Jose Pimentel, a priest who has led services at Naval Base Coronado and Naval Air Station North Island for eight years, said he is grateful for Bolivar's decision.

“It's wonderful news,” Pimentel said when reached by phone Tuesday. “I'm grateful that they realize the importance of the ministry we provide to the sailors, Marines and Coast Guard members — people of all diverse backgrounds — we're here for them.”

Sen. Lindsey Graham, R-South Carolina, wrote on Twitter Sunday that the Navy should “look at canceling Admirals, not priests.”

Archbishop Timothy Broglio, head of the Archdiocese for the Military Services, questioned the Navy's rationale for cutting priest contracts. In a statement Tuesday, he said the Southern California contracts amounted to $250,000, or “approximately .000156%” of the Navy's budget.

“It is difficult to fathom how the First Amendment rights of the largest faith group in the Navy can be compromised for such an insignificant sum,” Broglio said in the statement.

The changes to the Navy's religious ministries are part of a national realignment of services, to focus on younger, active-duty service members. It was announced on Aug. 20.

It is unclear how many priests this will affect nationwide.