She died in a suicide bombing in Syria. Now the Navy is changing the ‘fundamental flaws’ that sent her there

Navy officials are changing what a top admiral called "fundamental flaws" in its waiver and appeal process for commissioning programs after a sailor who was denied a chance to pursue a career as an officer was sent to Syria, where she was killed in a suicide bombing 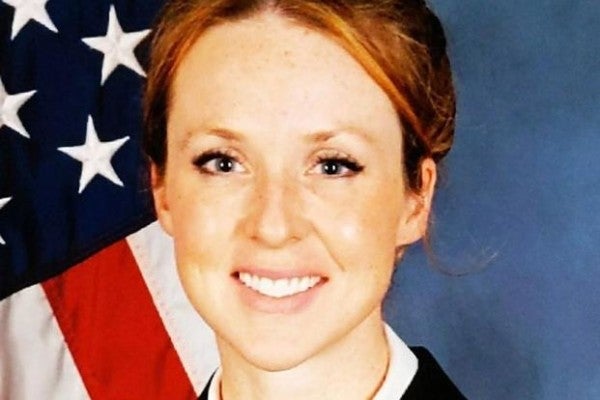 Navy officials are changing what a top admiral called “fundamental flaws” in its waiver and appeal process for commissioning programs after a sailor who was denied a chance to pursue a career as an officer was sent to Syria, where she was killed in a suicide bombing.

The action follows a call from seven lawmakers demanding that Navy leaders explain how they planned to update the policies that left Kent deployed to the war zone after rejecting a plan that would have allowed her to pursue a doctorate degree as part of a commissioning program.

The Navy denied Kent's plans to attend a clinical psychology program, Stripes reported, because the 35-year-old mother of two had previously been diagnosed with thyroid cancer. Despite that, the service considered her fit to deploy, and the linguist landed on her fifth combat tour in November when she was sent to Syria where she — along with 18 other people — was killed by a suicide bomber on Jan. 16.

In his Tuesday letter, Moran told the Kent family he had reviewed and discussed “every aspect of the policies and processes in place during Shannon's application to become a clinical psychologist,” according to Stripes. Moran's office did not immediately respond to a request for comment.

“There were many shortcomings in Shannon's case, mainly in our communications throughout and in fundamental flaws in our waiver and appeal process — I offer no excuses,” Moran wrote to the family. “… We believe this new policy will improve the quality, fairness, and consistency of the medical waiver process for all enlisted to officer commissioning programs, and I will report back to you in one year to inform you of our progress.”

Now, sailors who are deployed and seek a waiver, like Kent did, will have the highest consideration, Moran told the family. The Navy will also standardize its appeals process, including peer reviews for waivers and an option for sailors to get a second medical opinion, Stripes reported.

Kent's family had asked Moran to review the policies after her death. It's work Kent started last summer when she, along with her husband, sought the help from lawmakers after her waiver requests to pursue her doctorate had been denied.

Enlisted troops who want to become officers must meet higher medical standards than those already in uniform, Stripes reported. Since Kent had previously been diagnosed with cancer, she was disqualified.

Rep. Walter Jones, a Republican congressman from North Carolina who has gone to bat with several Pentagon leaders on troops' behalf, wrote to the Navy secretary last summer to get that rule changed. He called the policies discriminatory, adding that they prohibited upward mobility for enlisted personnel.

When asked whether the Navy would take the policy review a step further by allowing personnel who have previously been diagnosed with cancer but are now in remission a chance at a commission, Chief of Naval Operations Adm. John Richardson told reporters last week that it would require help from Defense Department leaders.

“That's a DoD rule,” Richardson said. “The first thing we ought to make sure is that we honor Chief Kent for her tremendous sacrifice and her commitment to her oath to support and defend the constitution. We want to be mindful that we're … communicating with her family first and foremost as we work through this.”

Kent's family told Stripes they hope to take up the issue with Defense Department leaders next for a military-wide fix. In the meantime, Kent's husband said he is pleased with Moran's response.

“The Navy has done all they can and moved rather quickly,” Joe Kent told Stripes. “They “changed as much of the commissioning process and waiver process as they can in their capacity as an individual service.”This article originally appeared on Military.com