A new guided missile destroyer named after a Hawaii Marine sergeant killed in fighting in Iraq in 2004 will be... 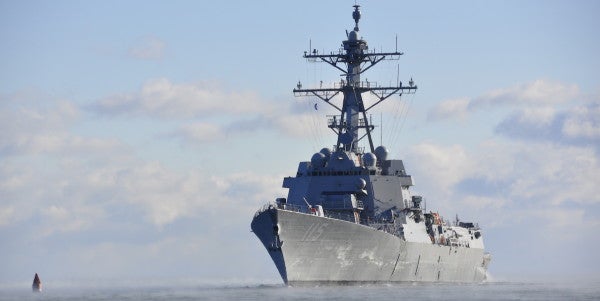 A new guided missile destroyer named after a Hawaii Marine sergeant killed in fighting in Iraq in 2004 will be commissioned today at Naval Air Station North Island in San Diego.

The USS Rafael Peralta honors the Marine who grew up in San Diego and was posthumously awarded the Navy Cross for actions during combat operations in Operation Iraqi Freedom. Peralta is credited with saving the lives of fellow Marines during the second battle of Fallujah in 2004.

Gen. Robert Neller, commandant of the Marine Corps, will deliver the ceremony’s principal address, the Navy said. Rosa Maria Peralta, Sgt. Peralta’s mother, is the ship’s sponsor. The destroyer will be homeported in San Diego.

“This commissioning memorializes the life of Sgt. Rafael Peralta and marks the beginning of what will be decades of exceptional service for this ship,” acting Secretary of the Navy Sean Stackley said in a release. “During Operation Iraqi Freedom, Sgt. Peralta acted heroically and sacrificed himself for his fellow Marines. He was proud to be an American, proud to be a Marine, and we are proud to welcome USS Rafael Peralta to the fleet.”

Peralta, a Mexican immigrant who joined the Marine Corps right after getting his green card, was assigned to the 1st Battalion, 3rd Marine Regiment out of Kaneohe Bay.

The ship naming followed a torturous review of Peralta’s actions on Nov. 15, 2004 to see if he should receive the Medal of Honor. Peralta was killed when several insurgents fired on seven Marines as they went room-to-room in house-clearing operations in Fallujah. According to an investigation, Peralta was shot in the back of the head by friendly fire — possibly a ricochet — and fell to the ground.

At least four Marines with Peralta stated in written reports that they saw the short and stocky 25-year-old nicknamed “Rafa” then pull a yellow grenade to his body when it bounced into the room, absorbing the deadly blast and saving the lives of others.

A Medal of Honor recommendation passed examinations by the Marine Corps, U.S. Central Command and the Department of the Navy before being rejected in 2008 by five individuals appointed in an unusual move by Robert Gates, then defense secretary, to review the nomination.

Secretary of Defense Chuck Hagel said in 2014 that he would not reopen the Medal of Honor nomination for Peralta, but calls to do so have persisted.

In a Washington Post story published in 2014, meanwhile, two of the Marines with Peralta said the extraordinary valor was made up shortly after he was wounded.

The USS Rafael Peralta will be capable of engaging in air, surface and subsurface battles simultaneously. The ship is equipped with the Aegis Baseline 9 Combat System which includes an integrated air and missile defense with ballistic missile shoot-down capability.