The CUSV is about 39 feet long and comes armed with a .50 caliber machine gun 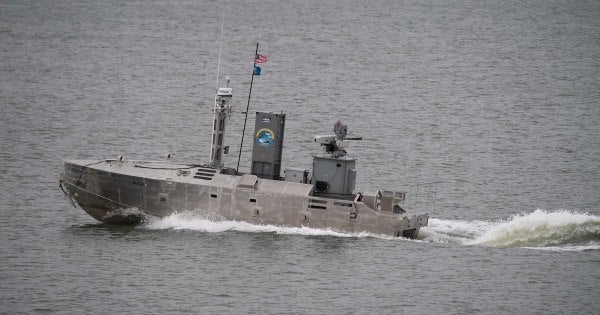 The Navy used what it calls a Common Unmanned Surface Vehicle, or CUSV, to patrol back and forth on the north end of the base near the destroyer USS Arleigh Burke and the aircraft carrier USS John C. Stennis.

The CUSV is about 39 feet long, was armed with a .50 caliber machine gun and came equipped with cameras and sensors controlled from a portable command center on shore with video game controllers. The vessel also has speakers on it that can be used to loudly warn nearby boats to stay away or change course.

During the experiment, which was part of a nationwide anti-terrorism and force protection exercise, CUSV operators in a portable trailer without windows detected a threatening vessel on a screen and quickly dispatched their vessel to change course and find out what its intent was.

The CUSV intercepted the threatening vessel, used its loud speaker system to warn it and eventually fired simulated shots to disable the boat and then went in for a closer look to inspect damage with its cameras.

A team of officials from the Navy and the CUSV's manufacturer, Textron Systems, will review its performance to see what may need to be improved before it can be used to guard bases.

Some of the questions being explored include whether the drone would allow sailors to stay out of harm's way, whether commanders could use its current capabilities with the understanding they'd improve over time, and whether it provides a better intercept than traditional manned watercraft.

Capt. Monty G. Ashliman, director of operations and public safety for Navy Region Mid-Atlantic, said the CUSV is “extremely close” to being ready for operational use.

Ashliman said the deployment of CUSVs depends on factors such as cost and the ability to train operators. But he said the concept of using an unmanned vessel is a strong one, because it could keep vessels out on the water longer and keep crew members at a safe distance.

“It's ultimately providing the installation commanding officer and that professional Navy security force with all the tools that they can possibly have to best protect the waterfront,” he said.