Textron Systems is working with the Navy to turn a mine-sweeping unmanned surface vessel designed to work with Littoral Combat Ships into a mine-hunting craft armed with Hellfire missiles and a .50-caliber machine gun. 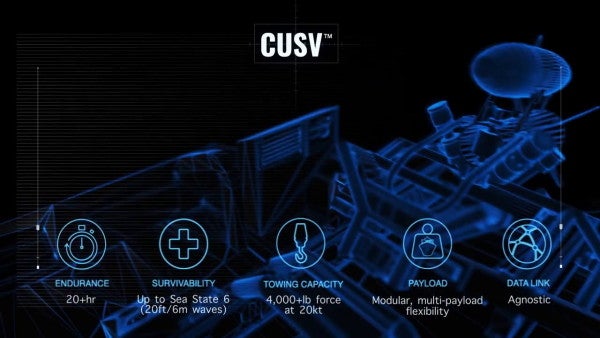 QUANTICO MARINE CORPS BASE, Virginia — Textron Systems is working with the Navy to turn a mine-sweeping unmanned surface vessel designed to work with Littoral Combat Ships into a mine-hunting craft armed with Hellfire missiles and a .50-caliber machine gun.

Textron is developing the mine-hunting package with the Naval Surface Warfare Center (NAVSEA) Dahlgren Division and Solutions Development Corporation at Dahlgren. The CUSV was originally intended to carry mine-sweeping packages for LCS vessels.

The Navy continues to test the CUSV and work toward a Milestone-C, full-rate production decision, Prender said.

“It was designed to be deployed and recovered from the Littoral Combat Ship to perform the mine-sweeping mission,” Prender said. “Since that initial concept, it has grown legs.”

This new effort pairs the CUSV with NAVSEA's Battle Management System and a remote weapons station that features a box-style launcher that holds two vertical-launched Hellfire missiles, as well as a .50-caliber machine gun, he said.

The system is designed to “operate autonomously, identify potential targets and threats, and then pass that to the remote weapons station,” Prender said.

“We would certainly like to see the Navy take what we have worked on and move that into a longer-term exercise,” Prender said.

The system is also being tested for use with Navy expeditionary-based vessels, he said.

“It was originally envisioned to be an LCS mission module; it has proven itself to be far more than just that,” Prender said.