Convoys are nothing new for the Navy, but it's something the service hasn't focused on since World War II 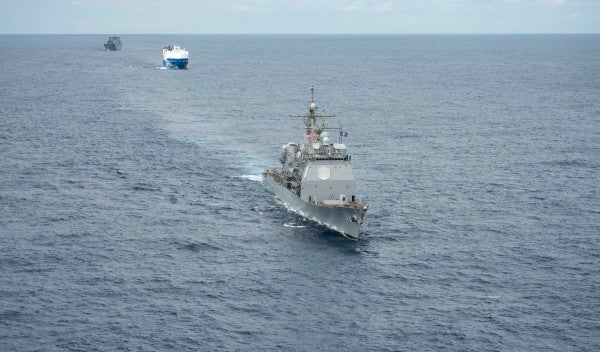 The Defender-Europe 2020 exercise will be the largest deployment of US-based forces to Europe in 25 years, with some 20,000 soldiers deploying from the US to join another 17,000 troops from 17 other countries.

The exercise will take place in April and May, and to get some of those soldiers and their gear to Europe, the U.S. Military Sealift Command cargo ship USNS Benavidez, U.S.-flagged merchant vehicle carriers MV Resolve and MV Patriot, are already sailing across the Atlantic, escorted by guided-missile cruiser USS Vella Gulf.

Convoys are nothing new for the Navy, but it's something the service hasn't focused on since World War II. Now, as the U.S. military reorients toward a potential clash with another sophisticated enemy, it's flexing that muscle again.

“We obviously would practice this a lot in World War II. After that, not so much, but we still did practice it,” Cmdr. Troy Denison, director of current operations for U.S. 2nd Fleet, told reporters on a phone call Friday. “But the last one we did was in 1986, so this is really the first time in quite a while that we've conducted a convoy operation.”

“In any sort of contested scenario or wartime scenario, over 90% of the combat power, the cargo, that gets from the United States over to the theater of operations is taken by sealift … controlled by the Military Sealift Command, both through its organic assets and contract and commercial assets,” Kim Harriss, supervisory marine transportation specialist with Military Sealift Command Atlantic, said on the call.

Sailing ahead of the Vella Gulf, Benavidez, and the cargo ships were the aircraft carrier USS Dwight D. Eisenhower and its strike group, with P-8 Poseidon patrol aircraft and a U.S. submarine, which “cleared the maritime battle space,” 2nd Fleet said in a release.

The whole exercise is meant to “simulate an opposed transit, testing the fleets' abilities to safely cross the Atlantic while testing new ways of conducting a convoy in today's environment,” the release said.

“An opposed transit is essentially a transit where you're likely or possibly going to encounter the enemy,” Denison said.

“In this particular case, there are stimulated and real enemy assets out there that the Benavidez and the Vella Gulf will encounter as they transit across the Atlantic,” Denison added, using “real enemy” to refer to live opponents rather than real-world threats.

The Eisenhower strike group sailed a few days ahead of the convoy to “sanitize the area” and “ensure no submarines or surface units were there to interfere with the convoy,” Denison said, adding that the the simulated enemy was then reset “so the convoy could also have an encounter with them … and react.”

The Eisenhower strike group “went into the simulated operating environment in which there were air, surface, submarine forces that were arrayed to attack the strike fleet,” Capt. Andrew Fitzpatrick, commanding officer of the Vella Gulf, said on the call.

“That whole scenario was such that they were to clear the area for the sea lines of communication to be open and available for Vella Gulf and the two MSC ships to transit through safely,” Fitzpatrick added.

The Vella Gulf and the cargo ships it's accompanying “are prepared to thwart any sorts of aggressive behavior that we're confronted with, whether they're aircraft, surface ships, submarines, and other types of attack, which does include cyber warfare,” Fitzpatrick said.

Shaking the rust off

That reorientation toward facing a sophisticated enemy — Russia and China — is part of “great power competition,” which the 2018 National Defense Strategy named as the primary concern in U.S. national security.

An element of that competition is what Adm. James Foggo, commander of U.S. Naval Forces in Europe and Africa, has described as the “fourth battle of the Atlantic,” referring to the environment that NATO navies share with an increasingly active Russian navy.

Russia's navy isn't what it was during the Cold War, but U.S. commanders have repeatedly expressed concern about its submarines, which are getting quieter, gaining longer endurance, and, with sub-launched missiles, are increasingly able to strike at European capitals and vital infrastructure, like ports.

Because of those subs and other Russian ships, Navy officials now see the Atlantic as contested.

“Our ships can no longer expect to operate in a safe haven on the East Coast or merely cross the Atlantic unhindered,” Vice Adm. Andrew Lewis, commander of U.S. 2nd Fleet, which oversees the western and North Atlantic, said this month in Washington, DC.

“How that crisis would evolve would definitely affect how we would approach that, but we're working a number of initiatives, frankly, and key is the full integration of the logistics warfighting function,” Lyons said at an Atlantic Council event.

“In the Defender 20 exercise that's coming up here shortly, there's a concerted effort … to work inside the maritime component, even though it's largely a land exercise in Europe, to synchronize our efforts with 2nd Fleet and 6th Fleet to facilitate the sealift move across the transatlantic,” Lyons said. Sixth Fleet oversees naval activity around Europe.

“Those are skills … [that] are probably a little rusty, right?” Lyons added. “We just haven't done that in a long time, so we're integrating it into our exercises. We're getting better fidelity on how our adversaries see the mobility enterprise, and there's a full-court press on in this particular area and how we would anticipate contested environments.”

Ensuring good coordination between 2nd and 6th fleets is one of the larger goals of the exercise, but it's also focused on interoperability between ships, Fitzpatrick said — “working through and identifying challenges, not just operating with Navy ships, Military Sealift Command ships, and contractors, but also being able to communicate … so if we actually have to execute this in a real-time event that we're better prepared to do that.”

A standing goal for military sealift command is getting equipment to port on time, Capt. Hans E. Lynch, commodore of Military Sealift Command Atlantic, said on the call.

For this exercise, Lynch added, “just doing the planning with larger Navy was one of our primary goals, and then execution, that's also key,” as is “identifying the critical gaps that we have in either our planning process or our equipment.”

One of the hurdles military sealift ships face is talking to those around them. “It can be very challenging for us to even communicate with ships that are right next to each other,” Lynch said.

“We're relying almost entirely on commercial services for our communication. We don't have nearly the same robust communication” as Navy ships and have to use iridium phones or other networks with less bandwidth, Lynch said.

“Right now, it's relatively fragile infrastructure that we're using to the best of our ability, and so far, we think that we'll be able to properly [command and control] the forces, but we have a lot more individual effort by our watch standers than what you would normally have on … a U.S. Navy ship,” Lynch said.

Finding those gaps in its planning, materials, and people is the main concern for Military Sealift Command, and it's something it's already been able to do.

“I think that we're already there in a lot of ways,” Lynch said. “Whether or not we're found by opposition forces … is almost in a way secondary for us at MSC.”