"It's a hateful experience. It's uncomfortable as hell," he said. "But people are usually taken in by the spectacle." 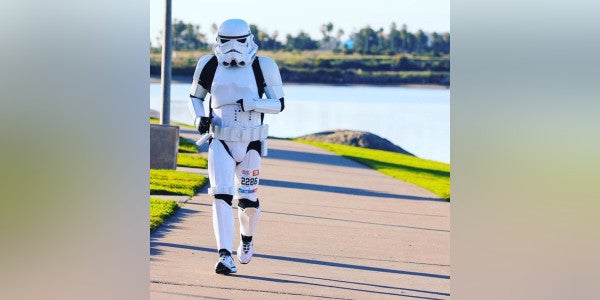 Jeffrey Priela, a Navy hospital corpsman at Camp Pendleton and an avid “Star Wars” fan, wore his full stormtrooper armor during a 10-kilometer ruck — which is a fast march carrying weight — to raise money for the Wounded Warrior Project. Since the 38-year-old Carlsbad resident first donned his armor for a charity ruck in 2016, he as raised thousands of dollars for a number of causes, including military, veterans, anti-violence, LGBTQ and local causes.

Priela said it isn't easy rucking in the armor. Heat and carbon dioxide build up in the suit, there's a lack of fresh air in the helmet and the armor is heavy and inflexible. It never gets easier pushing through a ruck in the hot sun, so he copes with the discomfort by envisioning the finish line and the money he will raise.

“It's a hateful experience. It's uncomfortable as hell,” he said. “But people are usually taken in by the spectacle in general, so when they see an Imperial stormtrooper strutting away in their neighborhood, they stop and are genuinely interested. Once they see my social media they then get diverted to my fundraising platforms.”

Priela was participating Sunday in the Wounded Warrior Project's annual Carry Forward 5K, which moved from a live in-person event this year to a virtual event. Now in its third year in San Diego, the Carry Forward has raised $328,000 since 2018. Project spokesman Chris Obarski said an estimated 6,000 people nationwide were expected to make solo walks, runs or rucks on Sunday, including 650 in San Diego County.

Obarski said the need for services has mushroomed since March, particularly in the field of mental health services for wounded veterans coping with isolation and financial pressures related to the pandemic.

Related: We salute the Air Force tech sergeant who moonlights as a Star Wars bounty hunter for charity

Priela joined the Navy 14 years ago after becoming hooked on “M*A*S*H,” the TV series about Army medics in the Korean War. Priela is a second-generation U.S. serviceman. He's the youngest of 10 children born to a Filipino soldier who fought for the U.S. in the Philippines during World War II. His father survived the Bataan death march and forced imprisonment at Camp O'Donnell, but had to fight for years to obtain his promised U.S. citizenship and veterans benefits. He died in 2012. When the federal government awarded Congressional Gold Medals to Filipino veterans in 2017, Priela proudly accepted the award on his father's behalf.