The Navy is bringing increased strike power to U.S. forces in the Pacific with a new deployment 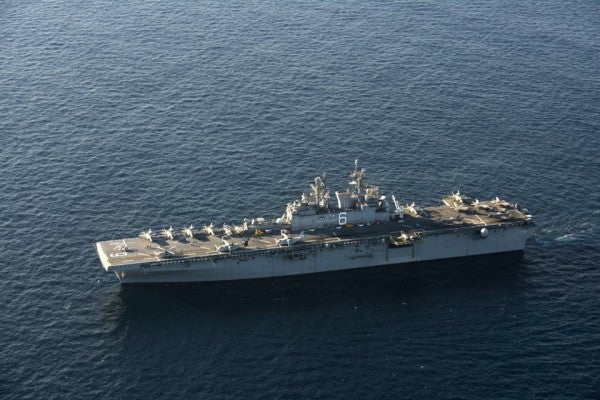 The Navy is bringing increased strike power to U.S. forces in the Pacific with a new deployment, the service said in a statement.

The USS America — a new, more-capable amphibious assault ship able to deploy with a heavier configuration of F-35B Joint Strike Fighters than its predecessors and serve as a light aircraft carrier — is joining the US 7th Fleet's forward-deployed naval forces at Fleet Activities Yokosuka in Sasebo, Japan.

The USS Wasp, a predecessor to the America-class amphibious assault ships, will depart the region for scheduled maintenance in Norfolk. The Arleigh Burke-class guided-missile destroyer USS Stethem will head to San Diego for the ship's mid-life modernization.

The USS America (LHA-6), the Navy's newest class of ship, floats off the coast of California(U.S. Marine Corps/Cpl. Thor Larson)

On his first day as acting secretary of defense, Patrick Shanahan made his priorities clear, reportedly stressing that the focus is “China, China, China.” The latest deployment is intended to increase US firepower in the Pacific at a time when China is flexing its muscles in the region.

“The security environment in the Indo-Pacific requires that the US Navy station the most capable ships forward,” Naval Forces Japan said in a statement on the USS America's rotation into the 7th Fleet area of operations.

“This posture allows the most rapid response times possible for maritime and joint forces,” the service said, adding that the latest deployment “brings our most capable ships with the greatest amount of striking power and operational capability to bear in the timeliest manner.”

The USS America is basically a light aircraft carrier

Unlike the the Wasp-class amphibs, the new America-class ships are more focused on aviation than amphibious assault.

These flattop ships were designed with increased jet fuel and equipment storage, as well as more aircraft maintenance space. The USS America is capable of carrying around 20 short takeoff/vertical landing (STOVL) F-35Bs, a variant of the fifth-generation fighter built specifically for the Marine Corps.

They can also deploy with fewer fighters and more tiltrotor aircraft and helicopters.

Turning amphibs into light carriers armed with F-35s is an experimental concept known as the “Lightning Carrier,” a new take on the traditional “Harrier Carriers” (amphibs armed with AV-8 Harrier jump jets) rebranded with the name of the new stealth fighter jets.

The USS Wasp recently sailed into the South China Sea with an unusually heavy configuration of ten F-35s. Observers suspect the Navy and Marine Corps were experimenting with the Lightning Carrier concept.

At one point, the USS Wasp was spotted launching fighter jets near the disputed Scarborough Shoal, putting Beijing on edge.