Editor’s Note: This article by Gina Harkins originally appeared on Military.com, the premier source of information for the military and veteran community. A Navy Reserve officer... 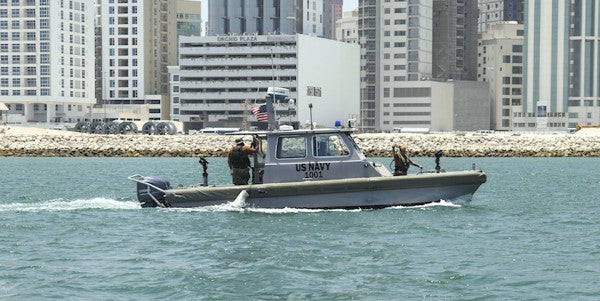 A Navy Reserve officer and Naval Academy graduate will face a general court-martial after allegedly leaving his unit for weeks while on active duty following a deployment to Bahrain, where he was accused of sex trafficking, hiring prostitutes and failing to report misconduct by other troops.

Lt. Cmdr. Joseph R. Nelson, a surface-warfare officer with the Naval Operational Support Center in New York, left his unit around June 19 and remained absent until he was apprehended on or about July 9, according to his charge sheet.

Once apprehended, Nelson allegedly gave an official statement to investigators during which he said he had completed his mobilization and was no longer on active duty. That statement, according to the charge sheet, “was totally false, and was known by the said Lieutenant Commander Joseph Nelson to be so false.”

Nelson also faces a slew of charges stemming back to a yearlong period near Al-Hidd, Bahrain, during which he's accused of publicly associating with and cohabitating with known prostitutes; failing to report other service members' misconduct; paying for sex; and trafficking by using force, fraud or coercion to cause a person to engage in sexual acts, according to the four-page charge sheet obtained by Military.com on Wednesday.

The alleged crimes in Bahrain occurred between June 2017 and May 2018, according to the charges. Nelson's case has moved into the arraignment phase, but a trial date has not yet been set, said Lt. Tim Pietrack, a spokesman for Navy Region Europe, Africa, and Southwest Asia, which is serving as the convening authority.

Nelson is the sixth member of the Navy — and only officer — to face charges for alleged crimes during a similar time period in Bahrain. Several of the lieutenant commander's charges constituted conduct unbecoming an officer and brought discredit upon the armed forces, the charge sheet states.

Related: Army Special Forces Soldier Indicted For Allegedly Trying To Smuggle 90 Pounds Of Cocaine Into US »

Navy officials have declined to comment on the six cases while hearings remain ongoing. The five enlisted sailors and Nelson were each the subject of separate probes by the Naval Criminal Investigative Service, Cmdr. Josh Frey, a spokesman for Naval Forces Central Command, said in August.

Bahraini leaders have long struggled to address forced labor and sex trafficking in the country. Migrant workers and unskilled laborers are particularly vulnerable to the crimes, according to the State Department.

All naval personnel deploying there must now complete training about how to spot human trafficking and what they can do to help combat the problem, including speaking up when they see others breaking the rules.

“The goal of this campaign is to raise awareness of this issue, reinforce Navy core values, and promote bystander intervention by encouraging sailors to speak up when wrongdoing or destructive behaviors are occurring,” Frey said. “The campaign also includes ongoing law enforcement and investigative measures to identify and appropriately address any further activity discovered.”

Nelson, who's originally from New Jersey, earned his commission in 2006 after graduating from the Naval Academy, according to his service records. He completed surface-warfare officers' school in 2011 before transitioning to the Reserve in 2012.