One of Russia's most advanced warships is sailing around in the Caribbean, but it's not alone: the U.S. Navy has dispatched a destroyer to keep a close eye on it 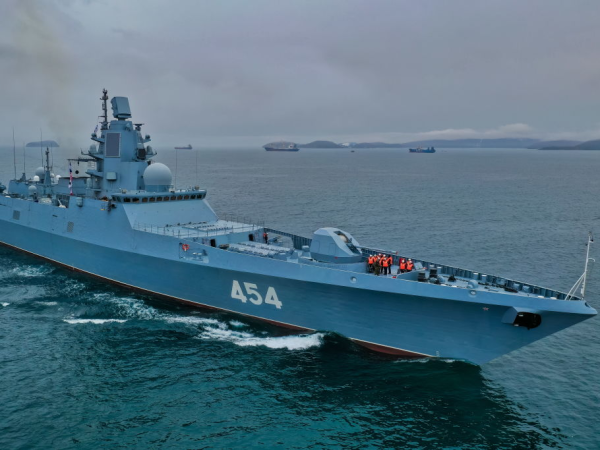 One of Russia's most advanced warships is sailing around in the Caribbean, but it's not alone: the U.S. Navy has dispatched a destroyer to keep a close eye on it.

The Admiral Gorshkov, the first of a new class of Russian frigates built for power projection, arrived in Havana, Cuba on Monday accompanied by the multipurpose logistics vessel Elbrus, the sea tanker Kama, and the rescue tug Nikolai Chiker, the Associated Press reported.

The Russian warship made headlines earlier this year when Russia reported that it was arming the vessel with a new weapon — the electro-optic Filin 5P-42 — that emits an oscillating beam of high-intensity light designed to cause temporary blindness, disorientation, and even nausea.

The U.S. military said Wednesday that it is monitoring the Russian ship's activities.

We are aware of the deployment of the Russian ship Gorshkov and are taking steps to actively track it. We won't discuss all measures being taken, but NORAD is conducting air operations in defense of the US & Canada and USNORTHCOM has deployed maritime assets to track Gorshkov.

The Admiral Gorshkov entered the Caribbean Sea via the Panama Canal on June 18. The ship departed its homeport of Severomorsk in February and has since traveled over 28,000 nautical miles, making stops in China, Djibouti, Sri Lanka, Colombia, and now Cuba.

The warship is preparing to make port calls at several locations across the Caribbean, the Associated Press reported, citing the Russian Navy, which has not disclosed the purpose of the trip.

Over the past decade, Russia has occasionally sent warships into the Caribbean. While these deployments are typically perceived as power plays, Russia characterizes them as routine. Russia has also sent Tu-160 strategic bombers into the area, most recently in December of last year.

While Russian ships have made visits to the Caribbean in the past, this trip comes at a time when the U.S. militaries are finding themselves in close proximity. For instance, in early June, a Russian destroyer nearly collided with a U.S. cruiser in the Pacific, an incident that came just a few days after a Russian fighter jet aggressively buzzed a Navy aircraft over the Mediterranean Sea.

Russia also sent ships of its Baltic Fleet to monitor the NATO BALTOPS 2019 exercises held in mid-June near Russia. These exercises involved ships and aircraft from 16 NATO allies and two partner countries.