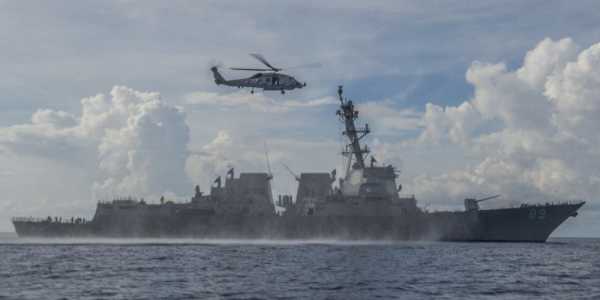 The guided-missile destroyer USS Mustin sailed within 12 nautical miles of Woody Island and Pyramid Rock in the Parcel Islands during a freedom-of-navigation operation, CNN reported Thursday, citing a defense official.

A 7th Fleet spokesman told the outlet that “the United States demonstrated that these waters are beyond what China can lawfully claim as its territorial sea.”

The Paracel Islands are among the contested territories in the South China Sea where China has built military outposts to support its sweeping sovereignty claims.

The Chinese military dispatched naval and air assets to shadow the Mustin, Senior Col. Li Huamin, a spokesman for the Southern Theater Command, said Thursday, adding that the military issued warnings and expelled the ship from the area, China's Global Times reported.

The South China Sea, long a sore spot in U.S.-China relations, has seen an uptick in military activity lately.

The U.S. military has been increasingly active in the South China Sea in recent months. U.S. Navy warships have carried out multiple FONOPs, including two in late April, and U.S. Air Force bombers have been routinely flying over the disputed waterway. A pair of B-1B Lancers flew over the South China Sea Tuesday, the latest in a number of recent bomber overflights.

The Navy has also conducted joint drills with partners and carried out presence operations near regional disputes in a message to China.

Likewise, the Chinese military has also been active in the region, conducting drills and, in some cases, challenging the U.S. military.

Deputy Assistant Secretary of Defense for Southeast Asia Reed Werner told Fox News last week that there have been “at least nine” concerning incidents involving Chinese fighter jets and U.S. aircraft in the skies above the South China Sea since mid-March.

He also revealed that the destroyer USS Mustin had an “unsafe and unprofessional” encounter with a Chinese naval vessel in the waterway in April.

The Chinese ship was reportedly escorting a Chinese carrier. Chinese media reports said that a Chinese navy flotilla led by the Liaoning was conducting “mock battles” in the South China Sea last month.

Tensions in the South China Sea come at a time of rising geopolitical tensions between Beijing and Washington, which have spiked significantly in recent months in response to the spread of the coronavirus that first appeared in Wuhan, China.

Looking at the broader relationship between the U.S. and China, the Chinese defense minister said over the weekend that the U.S.-China relationship is now in a “high-risk” period.

“The U.S. has intensified the suppression and containment of our side since the [coronavirus] outbreak,” Defense Minister Wei Fenghe said, according to the South China Morning Post. U.S.-China competition and confrontation “has entered a period of high risk,” he added, speaking on the sidelines of the National People's Congress.

He stated that China should “strengthen our fighting spirit, be daring to fight and be good at fighting, and use fighting to promote stability.”

The U.S. has accused China not only of mishandling the coronavirus outbreak, which has caused global devastation, but also of pursuing its ambitions, especially in the South China Sea, while the world is focused on combating the virus.

The Department of Defense said in a recent statement it is “concerned by increasing, opportunistic activity by the [People's Republic of China] to coerce its neighbors and press its unlawful maritime claims in the South China Sea, while the region and the world is focused on addressing the COVID-19 pandemic.”

China has criticized the US for stirring up trouble in the South China Sea and causing regional instability.

The Pentagon argues that its actions in the region are “promoting regional stability, deterring Chinese aggression, and providing reassurance for our allies and partners so that they can stand with us and each other in resisting Chinese coercion.”

The U.S. has stressed that it intends to remain a permanent presence in the South China Sea.