A Chinese destroyer challenged a U.S. Navy warship in an “unsafe and unprofessional” encounter in the tense South China Sea... 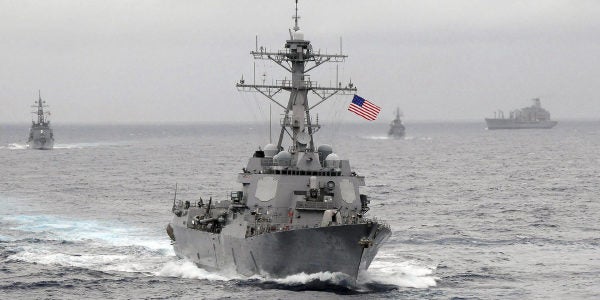 A Chinese destroyer challenged a U.S. Navy warship in an “unsafe and unprofessional” encounter in the tense South China Sea Sunday.

The Chinese vessel “conducted a series of increasingly aggressive maneuvers accompanied by warnings” for the U.S. Navy ship to “leave the area,” Pacific Fleet revealed in an official statement Monday. U.S. Navy photos first obtained by gCaptain and confirmed to CNN by three American officials show just how close the Chinese destroyer got to the U.S. ship. (The USS Decatur is pictured left, and the Chinese destroyer is on the right)

Three US officials confirm that images obtained by @gCaptain are US Navy images of the "unsafe & unprofessional" encounter between the USS Decatur and a Chinese destroyer that took place Sunday while the US warship was sailing near Gaven Reef in the South China Sea pic.twitter.com/A8Z4YPuXBS

The USS Decatur was forced to maneuver out of the way to avoid a collision with the Chinese vessel, which reportedly came within 45 yards of the American ship, although the pictures certainly look a lot closer to the 45 feet originally reported.

Ankit Panda, foreign policy expert and a senior editor at The Diplomat, called the incident “the PLAN's most direct and dangerous attempt to interfere with lawful U.S. Navy navigation in the South China Sea to date.”

China condemned the U.S. for its operations in the South China Sea, where China is attempting to bolster its claims through increased militarization. The US does not recognize Chinese claims, which were previously discredited by an international tribunal.

The latest incident followed a series of U.S. Air Force B-52H Stratofortress long-range bomber flights through the East and South China Sea. Beijing called the flights “provocative,” but Secretary of Defense Jim Mattis insisted that the flights would not mean anything if China had not militarized the waterway.

“If it was 20 years ago and had they not militarized those features there it would have been just another bomber on its way to Diego Garcia or wherever,” he said last Wednesday.