The U.S. sent a warship Sunday to challenge China's expansive claims to the disputed South China Sea, sailing near Chinese-occupied... 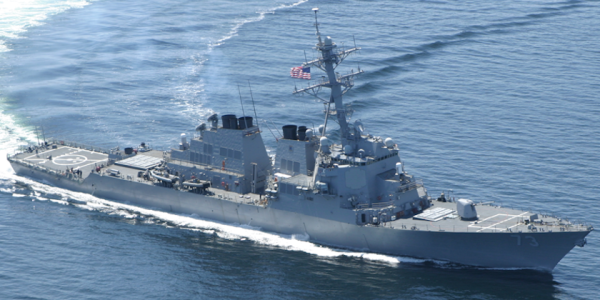 The Arleigh Burke-class guided-missile destroyer USS Decatur conducted a freedom-of-navigation operation, sailing within 12 nautical miles of Chinese-held territories in the Spratly Islands, CNN reported Sunday. The U.S. Navy's freedom-of-navigation operations “challenge excessive maritime claims and demonstrate our commitment to uphold the rights, freedoms, and uses of the sea and airspace guaranteed to all nations under international law,” a U.S. official told reporters.

The Navy has conducted more than half a dozen such operations since the start of the Trump administration.

The latest challenge to China comes on the heels of three different US B-52 bomber flights over disputed seas. Two B-52H Stratofortress heavy long-range bombers flew over the South China Sea last Sunday and this past Tuesday, and another linked up with Japanese fighters for joint drills over the East China Sea Wednesday, according to Pacific Air Forces.

Last month, B-52 bombers flew over the East and South China Sea a total of four times.

U.S. allies and partners have also been stepping up their activities in the contested South China Sea. Earlier this month, the UK Royal Navy amphibious assault ship HMS Albion sailed near the Paracel Islands, prompting China to send out a frigate and two helicopters to challenge the British vessel.

Over the past month and change, Japan has sent submarines to the South China Sea for exercises, a first for the country, and drilled alongside the U.S.

China called the most recent bomber flights “provocative,” warning that it would take “necessary measures” to safeguard its national interests. This weekend, China conducted “live fire shooting drills” in the South China Sea to improve its combat capabilities.

These incidents on and above tense tides in the East and South China Sea come amid the deterioration of U.S.-China relations over issues ranging from trade to Taiwan to military matters.