Sailors say that being at sea for 215 days really sucked

'Most people were, like, extremely stressed out about it all the time,' one sailor said. 'Some people were kind of agitated a lot.' 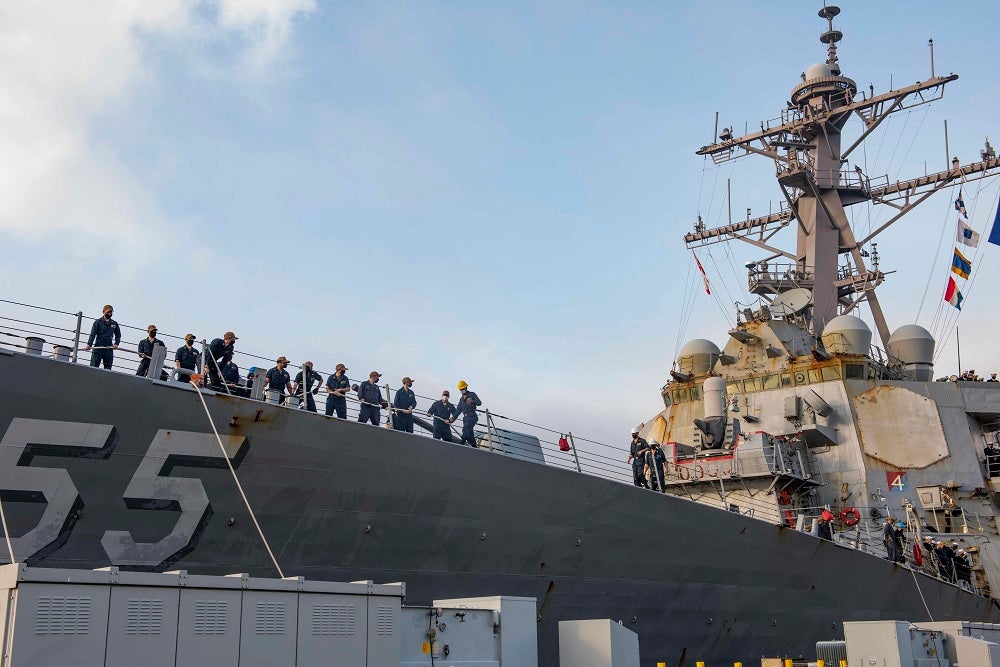 That’s how one crew member from guided-missile destroyer USS Stout described the ship’s record-breaking 215 days at sea during a deployment punctuated by COVID-19.

When Stout left Virginia’s Naval Station Norfolk in January, masks and social distancing were not part of everyday life. But as COVID-19 has upended most things, it wasn’t long until it affected Stout, nixing port calls that break up long periods underway and isolating its crew.

Stout initially left Norfolk as part of the Eisenhower, or “Ike,” Strike Group for pre-deployment certification. The Navy announced in February that rather than return home the Ike and its escorts were immediately crossing the Atlantic Ocean for a routine deployment. Those ships began returning home in August, but Stout stayed in the Middle East, where it protected merchant ships and completed other security operations.

Dozens of supporters congratulated the crew and wished them a safe return in posts on Stout’s official Facebook page, but one commenter broke up the celebratory feel.

“Not something to be proud of,” the person wrote.

A Stout sailor, speaking to Insider on the condition of anonymity in order to be candid about the deployment without retribution from the Navy, said crew members were not allowed to leave Naval Station Rota, in Spain, when they arrived in March.

When they returned to Rota in early October, they got a party confined to the pier with alcoholic drinks and pizza. No outsiders were allowed. The following day, sailors were allowed to visit the Naval Exchange.

“It was kind of refreshing, I guess, to see something other than, you know, haze gray and the ocean,” the sailor said in a phone interview.

Throughout the deployment, news about the virus’ spread — including aboard the aircraft carrier Theodore Roosevelt in March and April — trickled through the crew when they could search for it online, the sailor said. Some news was shared through the command.

“A lot of the time we were kind of in the dark about stuff unless we really wanted to know,” the sailor said.

Morale hit a low point during the second half of the deployment, the sailor said, even as the command attempted to keep spirits up with “steel beach” picnics on the ship’s deck, karaoke, and video-game tournaments. A Navy news release also said the crew was treated to swim calls, but the only times the Stout sailor remembered anyone going into the water were brief trainings for search-and-rescue swimmers.

“Most people were, like, extremely stressed out about it all the time,” the sailor said. “Some people were kind of agitated a lot.”

Homecomings at Norfolk tend to be heartfelt and festive affairs with families crowding piers. That’s another casualty of COVID-19. To prepare for their return stateside, the Stout’s crew was given masks, hand sanitizer, and practiced social-distancing, including sitting 6 feet apart during meals, the sailor said.

When Stout arrived home in mid-October, the public noted how rusty it was. The Navy quickly removed the rust.

The needs of the Navy

While the Stout sailor was disappointed by the deployment, they realized the command was limited by the pandemic.

Stout’s commanding officer, Cmdr. Rich Eytel, said the command had to get “creative” to maintain morale amid the ship’s high operational tempo.

“I truly could not be more proud of the toughness displayed by my crew,” Eytel wrote in response to questions from Insider sent through the Navy’s 2nd Fleet.

“Through it all, the men and women onboard Stout stood the watch, corrected critical casualties, and answered the call from a nation who depended on her to be a mission-ready ship with a combat-minded crew, while isolated and alone six thousand nautical miles from home in the time of a global pandemic,” Eytel added.

While underway, the crew spent a week completing maintenance that typically would be done in port, Eytel wrote.

How well the crew documented that work and the ship’s other mechanical needs will matter when it’s time for Stout’s maintenance period, said retired Navy Capt. Bill Crow, president of the Virginia Ship Repair Association.

While a record deployment may not have been what the Stout’s sailors had in mind, all that time together can help solidify a crew and make it more self-sufficient, said Crow, whose own Navy experiences include several weeks spent off the coast of Lebanon following the 1983 attack on a US Marine compound that killed more than 200.

“They can sit their grandson on their knee when they’re old and tell them, ‘Hey, I served my country and I did it like this,'” Crow said.

While the long-term effects of multiple combat deployments on service members and their families have been studied, RAND Corp. sociologist Sarah Meadows said it’s hard to say what long-term toll a protracted deployment during a pandemic might have on service members who are likely to be worried about events back home and the loved ones there.

“We haven’t done any research on what that’s like during a, you know, a global pandemic,” Meadows said of reintegration. “So it might be a little bit like coming back from being on the moon.”

Responses could depend on a sailor’s expectations of the deployment as well as the experience itself, including the ability to communicate with family while they were gone and decompress from work, Meadows added.

“Maybe the Navy should think about how long the particular sailors on this ship should be at home before they are eligible to get on another ship again,” Meadows said. “I wouldn’t send them out in December, right? But it’s always the needs of the Navy.”

Do you have a personal experience with the coronavirus you’d like to share? Or a tip on how your town or community is handling the pandemic? Please email covidtips@businessinsider.com and tell us your story.

Get the latest coronavirus business & economic impact analysis from Business Insider Intelligence on how COVID-19 is affecting industries.