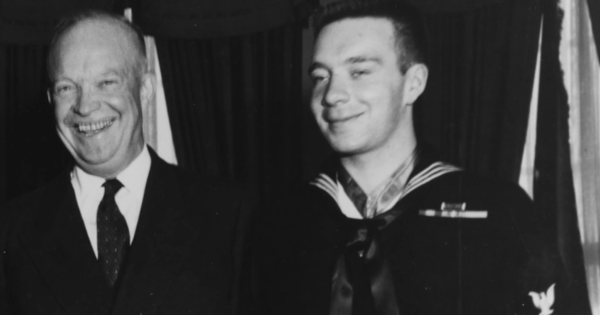 The future Arleigh Burke-class guided-missile destroyer, DDG 130, will be named in honor of Hospital Corpsman Master Chief William Charette, a native of Ludington, who fell on a grenade to shield a wounded Marine during a battle in North Korea on March 27, 1953.

“The actions of Hospital Corpsman William Charette will neither be forgotten or diminished,” Secretary of the Navy Richard V. Spencer said in a statement.

“Charette put himself at extreme risk during intense combat to render aid to Marines in need. His efforts saved lives and I am honored that his legacy will live on in the future USS William Charette.”

President Dwight D. Eisenhower poses with three men to whom he has just presented the Medal of Honor for conspicuous gallantry in Korean War combat action, at the White House, Washington, D.C., 12 January 1954. Those who received the medal are (from left to right): First Lieutenant Edward R. Schowal(U.S. Naval History and Heritage Command)

During a counterattack, an enemy grenade landed near Charette, who was providing aid to a wounded Marine. Charette placed himself on top of the Marine to shield him from the explosion.

The blast rendered Charette unconscious but when he awoke, he continued to aid Marines, including using torn parts of his uniform in order to dress battle wounds, his own battle vest to shield a wounded Marine, and exposing himself to incoming rounds in order to carry wounded Marines to safety.

All five enlisted Sailors who received the Medal of Honor for actions during the Korean War were Navy hospital corpsmen attached to the Marine Corps, but Charette was the only living recipient.

He died on March 18, 2012, due to complications from heart surgery.

The ship named for Charette will be constructed at Bath Iron Works, a division of General Dynamics in Bath, Maine. The 509-foot long vessel will have a beam length of 59 feet and will be capable of operating at speeds in excess of 30 knots.

The future USS William Charette will be a Flight III destroyer, capable of fighting air, surface and subsurface battles simultaneously.

It will contain a combination of offensive and defensive weapon systems designed to support maritime warfare, including integrated air and missile defense and vertical launch capabilities.

SEE ALSO: The Corpsman Who Sprinted Into Gunfire To Save 5 Marines