Two U.S. warships have passed through the Taiwan Strait, the first since July last year, in a move likely to... 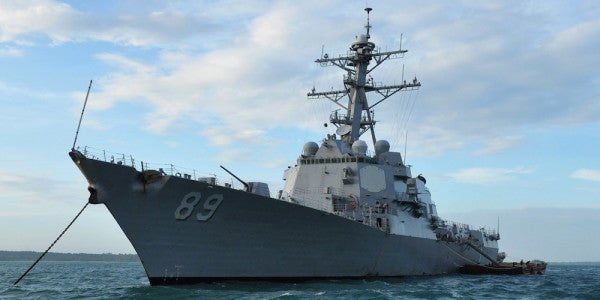 Two U.S. warships have passed through the Taiwan Strait, the first since July last year, in a move likely to be seen in Beijing as a show of support for Taipei by Washington.

The USS Mustin and USS Benfold guided-missile destroyers, which are both home-ported at the U.S. naval base in Yokosuka, Kanagawa Prefecture, were the first such American vessels to pass through the strait since the USS John McCain made the transit in July 2017.

The move comes amid a trade war between the U.S. and China and escalating tensions between Taiwan and China, which has warned that it will defend — by force if necessary — its “One China” principle under which the self-ruling island is seen as part of China’s own territory, awaiting reunification.

Capt. Charlie Brown, a spokesman with the U.S. Pacific Fleet, confirmed the voyage, but played down its significance.

“U.S. Navy ships transit between the South China Sea and East China Sea via the Taiwan Strait and have done so for many years,” Brown told The Japan Times.

Taiwan’s Defense Ministry had earlier announced the sailing, identifying the two warships by their hull numbers and saying they had entered the southern part of the strait and sailed in a northeasterly direction.

“The military is monitoring the situation in neighboring areas, and has the confidence and abilities to maintain regional stability and defend national security,” it said in a statement late Saturday.

China has ramped up its military presence near Taiwan, sailing its sole operating aircraft carrier through the strait in January and March and holding large-scale exercises near the self-ruled island in recent months.

The U.S. Navy has not sailed an aircraft carrier in that area since 2007.

Although the U.S. does not have formal diplomatic ties with Taiwan, it is its most powerful ally and top arms supplier.

China’s hostility toward Taiwan has grown since the 2016 election of President Tsai Ing-wen, a member of the island’s pro-independence Democratic Progressive Party.

Beijing suspects Tsai wants to push for formal independence, which would cross a red line for Communist Party leaders in China, although Tsai has said she wants to maintain the status quo and is committed to ensuring peace.

Beijing has also managed to deplete Taipei’s diplomatic allies, luring away four since Tsai came to power and leaving it with only 18 countries worldwide that recognize it over China.

China has also been angered over recent warming relations between the U.S. and Taiwan, after Trump signed legislation paving the way for mutual visits by top American officials and the U.S. government green-lighted a license required to sell cutting-edge submarine technology to Taipei.

The U.S. State Department has also reportedly requested the deployment of a detachment of marines to help safeguard new facilities of the American Institute in Taiwan, Washington’s de facto consulate in lieu of formal diplomatic ties, in Taipei.

Collin Koh, a specialist in regional naval affairs at Singapore’s S. Rajaratnam School of International Studies, said the warships’ transit was likely a message from the U.S. that it continues to support Taiwan.

“These days, Taiwan has been under quite a bit of pressure from China— the snatching of multiple countries from Taiwan’s already paltry pool of formal diplomatic allies within a short span of time, regular aerial and naval ‘island patrols,’ even cyberattacks on the island,” Koh said. “It has reached a point where there’s rising calls within the U.S. political and defense establishment to help Taiwan stave off this pressure.”

Koh also said the move was unlikely to be a one-off, adding that Beijing would continue to apply pressure on Taipei.

“Taiwan is a key ‘core interest’ of Beijing and recently we see more strident resistance voiced out in Chinese state media against perceived U.S. moves to undermine such interest,” Koh said. “So there’ll be no rolling back by China.”

Taiwan, he added, is at the forefront of key issues for China — perhaps even more important to Beijing than its territorial row with Tokyo in the East China Sea over the Japanese-controlled Senkaku Islands, known in China as the Diaoyus.

“If we need to do a comparison, Taiwan certainly ranks above other topical hot-button issues such as even the East and South China sea disputes,” Koh said. And Taiwan is surely a litmus test for (Chinese President) Xi Jinping’s repeated exhortation to protect China’s national sovereignty and territorial integrity.”