A new prototype developed by a team of engineers and experts at the Naval Surface Warfare Center Panama City may help medical staff breathe a sigh of relief. 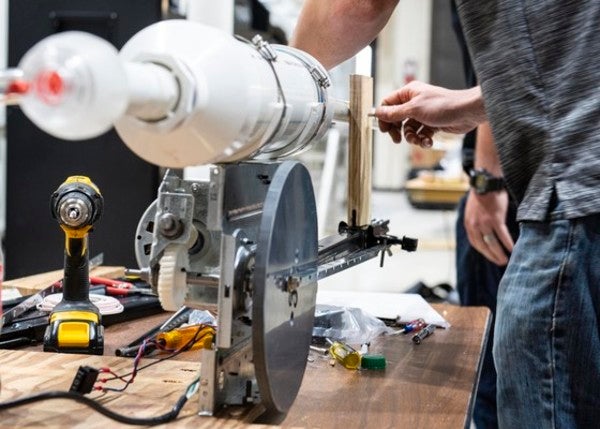 NAVAL SUPPORT ACTIVITY PANAMA CITY — As hospitals across the nation report shortages of ventilators amid the growing need to support coronavirus patients, a new prototype developed by a team of engineers and experts at the Naval Surface Warfare Center Panama City may help medical staff breathe a sigh of relief.

“The prototype costs $254, weighs 35 pounds, uses things you can buy in any local hardware or auto parts store and can be assembled by anyone using only household tools,” NSWC PC Mechanical Engineer Andrew Schicho said in a statement. “It runs on 120 VAC, has on-board battery backup, is portable enough to be carried by one person — and can be built in about a day.”

“It isn't pretty, but it will get the job done for now,” Schicho added, noting for $150 more, the ventilator could be equipped with a digital readout and wireless control.

The project was a race against time. The Department of Defense gave teams at different universities and agencies two weeks to develop the prototype. While four out of five teams at NSWC PC developed concepts and designs, only Schicho's team built and tested its prototype — which performed above DoD requirements.

According to Schicho the machine was required to run a minimum of 48 hours.

“We've been running it for four days and it hasn't stopped yet,” he said Tuesday morning. The durability of the concept is truly life-saving, particularly in the case of COVID-19.

More ventilators will free medical personnel of the burden of choosing who will get the life-saving help and who doesn't, said NSWC PC Innovation Lead Holly Gardner. The opportunity to remove that burden and to save lives is what stimulated her teams on the COVID-19 ventilator project.

“A lot of times you don't get a lot of interest,” Gardner said, regarding other DoD call-outs for concepts and designs. But “I think this is so time sensitive and people realized they could make a real world difference, so people just wanted to dive in and see what they could do to help. They were very eager.”

The DoD “put the call out and we leaned into the opportunity,” she added. “It happened really quickly and the teams went from concept to design and then actually prototyping within a couple of days.”

The team used the NSWC Hydrospace Lab for its base operations and the Navy Experimental Dive Unit for medical expertise.

“I can't say enough about the team's attitude and willingness to make personal sacrifices during this project. This was truly a cross departmental, cross organizational effort with an absurdly short fuse and a laundry list of requirements which didn't seem possible,” Schicho said. “Even though I had no right to ask this of them, and only (with a) possibility of funding, everyone stepped up to the challenge without hesitation and made it happen while performing their normal duties on the side.”

If the team wins the challenge, which included hundreds of submission across the country, the prototype could become a patented product and deployed quickly for use against COVID-19 at home and abroad — by purchase or do-it-yourself.