The Navy said Friday it is disciplining nine sailors and one civilian in the wake of a 94,000-gallon jet fuel... 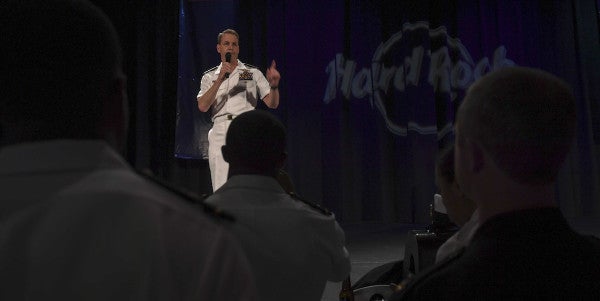 The Navy said Friday it is disciplining nine sailors and one civilian in the wake of a 94,000-gallon jet fuel spill at Naval Air Station Oceana in May that snarled nearby traffic, killed wildlife and sent noxious fumes into nearby neighborhoods causing residents headaches and nausea.

“The investigation found multiple instances of human error, dereliction of duty, and local oversight failure as causing the chain of events that led to the spill,” Rear Adm. Jack Scorby, commander of Navy Region Mid-Atlantic, said at a morning news conference.

“We are holding people accountable for their actions, or inactions, that led to the spill, and have taken measures to keep this from happening again.”

Scorby said disciplinary actions range from imposing non-judicial punishment that could include a reduction in rank to referral to trial by court-martial.

Dereliction of duty is a crime under the Uniform Code of Military Justice and means someone didn’t perform the job they were qualified, trained and appointed to perform, according to the Navy.

Scorby said dereliction of duty occurred when those standing watch failed to make hourly rounds to ensure that fuel tanks were not leaking.

No names were released Friday, but Scorby said those being disciplined include junior enlisted sailors and senior officers. Seven of the nine already have been punished.

The Navy has said the fuel spilled May 10 when a switch left in the wrong position during a delivery diverted fuel from three 880,000-gallon tanks to a 2,000-gallon tank. By the next morning, about 25,000 gallons had spread to London Bridge Road as well as a ditch that runs parallel to it and into Wolfsnare Creek, a tributary of the Lynnhaven River.

It was the largest fuel spill in Oceana’s history, and the combined cleanup efforts of the Navy, Coast Guard, state and local officials has cost $3.8 million. That includes $184,000 for the cost of the fuel spilled and about $180,000 for the cost of hotels and meals for 48 families who temporarily relocated. Of those, all but one family has returned home, and the Navy is no longer paying for its lodging.

“This was a terrible situation and inconvenience for the nearby neighborhoods. Through this all, we have kept the families affected by the spill our top priority,” Scorby said.

Scorby said an investigation found that the manual fuel lever was opened about 2 p.m. on May 10 and remained open until about 6:25 a.m. the following day, when it was discovered by two incoming sailors making their initial rounds.

“The investigation further discovered a number of instances in which the sailors on watch during this time frame failed to perform their appointed duties,” Scorby said.

Although the Navy said air quality readings showed the area was safe, residents complained of headaches, nausea and sore throats, with dozens of families accepting the Navy’s offer to temporarily relocate to hotels.

More than 1,400 animals, mostly fish, also had been found dead as a result of the spill, while marsh vegetation turned brown. About 20 animals were recovered, treated and released. The Navy said fish and shellfish in Wolfsnare Creek are safe to eat.

The Navy said it captured all visible and recoverable fuel off base by May 26, and that excavation of soil near the spill site on Oceana was completed June 9. Absorbent booms remain in Wolfsnare Creek to capture any residual jet fuel, Scorby said.

To prevent a similar incident in the future, Scorby said the number of personnel on watch has doubled from 20 to 40.

An overflow-prevention valve also is being installed in the 2,000-gallon recovery tank that would cut off the flow of fuel once the tank reaches 95 percent capacity. Additionally, engineers have added a spring-loaded drain valve, which means someone would have to hold a lever down that, if released, would automatically stop the flow.

Scorby said the base also would try to schedule fuel deliveries for between 7:30 a.m. and 9:30 p.m.

“The Navy is committed to the continued monitoring and assessment until we are confident we’ve done everything we can to clean this up. Getting this right is important to us, because we live and work in the community as well.”