"The frustration for those of us caring for the patients is enormous and exhausting. We do the best we can.’’ 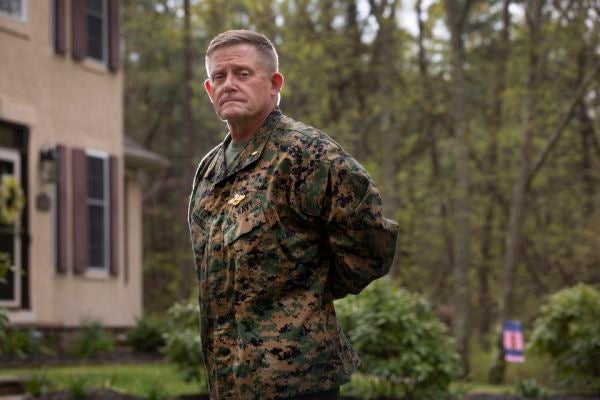 The Italian soldier somehow still had a pulse. A sniper’s bullet had shattered his skull, leaving a crater that exposed his brain. Dr. Joe Costabile, a surgeon in the U.S. Naval Reserve Medical Corps, was waiting for him, just in case he could be saved.

“When he got to us, he had a severe head injury that wasn’t survivable,” he recalled. “All we could really do was put him on a morphine drip, push him into a quiet area and allow him to expire peacefully.”

Costabile has worked at a trauma center in Camden. He is a general and vascular surgeon at two New Jersey medical facilities. And he spent a year-long deployment in Kuwait in 2005 during Operation Iraqi Freedom. There he witnessed catastrophic injuries that ranged from the Italian solider’s head wound to the “horrific” sight of a pair of Marines whose bodies had been torn apart by an improvised explosive device, he said.

But the 66-year-old Marlton resident had never experienced anything like the recent five-week stint he spent in the epicenter of the COVID-19 crisis.

Costabile was sent to Woodhull Medical Center in Brooklyn, a 320-bed public facility that had recently converted most of its wards into makeshift intensive care units to treat the surge of coronavirus patients.

He encountered “a nightmare” and “war-like conditions” at the Bedford–Stuyvesant hospital. The staff was overwhelmed. Resources were inadequate. People were dying despite life-support measures, only to be replaced by a flood of new patients needing to be placed on ventilators and dialysis.

“It’s different than what we experienced in a true combat zone, where bullets are flying and mortars are going off,” Costabile said. “You’re dealing with an invisible enemy that can make you sick and kill you.”

Costabile is a general and vascular surgeon for the Virtua Surgical Group in Voorhees and at Our Lady of Lourdes Medical Center in Camden. He recently served as the 224th president of the Medical Society of New Jersey, the oldest professional society in the country.

But for the past 15 years, he’s been called to serve a series of missions as a member of the 4th Medical Battalion with the U.S. Marine Corps.

'Give my country some payback'

Costabile joined the U.S. Navy Reserve in 1994 while doing his vascular fellowship. His initial thought “was I’d join for a couple of years and give my country some payback,” he said.

Now, 26 years later, he’s a captain and doesn’t have any regrets. He served as the head surgeon for the U.S. Military Hospital in Kuwait and was the chief of professional services for the 1st Medical Battalion Alpha Company at Camp Al Taqaddum, Iraq.

“It’s been a great experience, although it hasn’t all been gravy,” Costabile said. “I will tell you that when I shuffle off this mortal coil, some of the high points for me are going to have been serving in the military.”

He was notified in mid-March that he could be needed to help during the coronavirus pandemic.

The email gave Costabile three options: Serve at a medical facility in New York. Serve at one in California. Or check a box passing on a deployment at this time.

Costabile received a call from his commanding officer to fill out his orders on the first Saturday in April. Within 24 hours, he was at a U.S. Army base in Lakehurst with 325 reservists from the Department of Defense and transported by bus to New York.

Their mission for the Army’s Urban Augment Medical Task Force was to provide medical care and aid the staff in the 11 New York City hospitals hit hardest by the coronavirus pandemic.

Costabile figured he would be dispatched to the Navy’s hospital ship or to another mobilized facility that city officials had staged to support medical facilities overwhelmed with COVID-19 patients.

Instead, Costabile was sent to Woodhull.

Midway through a 12-hour shift on his second night in the ICU, Costabile joined a team of military doctors, nurses, respiratory therapists and other medical personnel for a meeting with his commanding officer.

“He told us, ‘Normally when we go into battle, we know who the enemy is. But make no mistake about it. This is a war with an invisible enemy,’” Costabile said. “He said, ‘This is a different combat situation where us, as doctors and nurses, are the tip of the spear. We’re basically the combatants.’”

‘Surprised by how bad it was’

From 1,400 miles away in Sugarland, Texas, Angella Mudd believed reports of the COVID-19 crisis in New York were overblown.

“I was sure that the media was exaggerating,” said Mudd, an Air Force lieutenant colonel.

Then she was called to duty April 4.

Roughly 12 hours after getting home from an emergency room shift at a Houston hospital, Mudd was dispatched to Joint Base McGuire-Dix and assigned the role of chief nurse for the Air Force members deployed to northern New Jersey, New York City and parts of Connecticut.

“When we initially got here, we were all kind of surprised by how bad it was,” Mudd said.

Like Costabile, Mudd is a reservist who was deployed during the Iraq War. And she doesn’t mince words when describing the conditions she continues to face in New York City, home to more more than 191,000 confirmed COVID-19 cases and more than 20,000 coronavirus-related deaths.

“I will tell you that probably what I saw is worse than what I saw coming from the Middle East,” Mudd said. “I know some people have said, ‘Well, this is what they signed up for.’ I agree to a certain point.

“But as military members, we were not prepared for this. It was shocking to see. I’m an experienced emergency room and labor delivery nurse. After 28 years of doing this, I will say I was shocked at how sick they were (and) how quickly things went bad.”

As a chief nurse overseeing seven of New York’s hardest-hit hospitals, Mudd has watched dozens of patients die in a given day.

This deployment has been “scarier” for her husband and four children than her stints in Iraq, Mudd said.

“It’s not like when you go to the Middle East, where you think you know who the enemy is,'' she said. “Here the enemy could literally be a 2-year-old (contagious) child. You just don’t know.”

Mudd was 39 years old when she enlisted and has been on reserve duty for 11 years. Since her typical orders last six months, she figures to be in New York through the summer.

“When we’re called, we jump,” Mudd said. “And sometimes when we’re not called on, it’s upsetting.”

The worst day for Costabile came on a Sunday in mid-April.

Two of the three people who needed life-support measures in his Woodhull ICU died. Three others needed to be put on ventilators during his 12-hour shift.

“That was brutal,” he said.

The experience taxed him in ways even serving as head surgeon at a military hospital could not.

“It probably wasn’t as physically demanding as as being deployed to the Middle East,” Costabile said, “but emotionally it was pretty rough.”

As he did in previous deployments, Costabile would spend his downtime collecting his thoughts and writing about his experiences.

“The staff is dedicated and hardworking and they do their best, but the situation is overwhelming. Long shifts, nonstop admissions, patients intubated … inadequate resources. It is a nightmare,” he wrote in a blog last month.

“The patients are on ventilators, all of them are on vasopressors for blood pressure, many of them require dialysis. They are all heavily sedated. They require intensive care which is being given in regular patient rooms, battlefield conditions. In order to examine the patients, you have to wear head covering, plastic gown, gloves and goggles or face shield, N-95 masks covered with a regular surgical mask — it’s like getting ready for deep space exploration. You enter the room, cramped and stuffy and examine the patient, make vent changes or whatever needs to be done and exit. The monitors are placed near the door of the rooms so the nurses don’t have to get all geared up to check the vital signs. There are no visitors. They are not allowed in the hospital. We make daily calls to the families for updates.

“Patients die surrounded by strangers who have desperately tried to save them. The frustration for those of us caring for the patients is enormous and exhausting. We do the best we can.’’

Woodhull treated nearly 1,000 COVID-19 patients in April, according to Dr. Nejat Zeyneloglu, the chair of the hospital’s department of medicine. The hospital normally has capacity for 24 critical-care patients, but officials at the northern Brooklyn medical center added 40 ICU beds to keep up with the surge.

“We’re a medium-sized community hospital, and all of a sudden, we became a very large-sized hospital,” Zeyneloglu said. “I can’t just speak for Dr. Costabile, but the whole Navy Reserves team did a fantastic job. They arrived when we needed them the most. It was almost impossible to manage without them.”

Costabile is home now, relaxing in self-quarantine alongside his wife, Yolanda, at his South Jersey home. He tested negative for the coronavirus after his five-week deployment ended May 10.

Despite witnessing what he described as “battlefield conditions,” Costabile says he’d do it again in a heartbeat.

“People will laugh because I’d say, ‘Yes,' without hesitation,” Costabile said. “But it’s because it needs to be done.”