The U.S. Navy for decades has deployed bottlenose dolphins to search for underwater mines and detect enemy divers. Now, the... 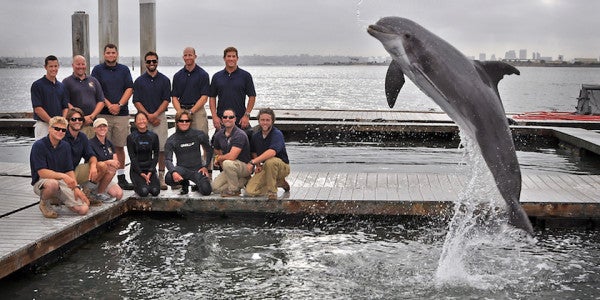 The U.S. Navy for decades has deployed bottlenose dolphins to search for underwater mines and detect enemy divers. Now, the versatile sea mammals and their San Diego-based trainers are preparing for an unprecedented challenge: locating some of the few surviving vaquita porpoises in Mexico’s Upper Gulf of California.

Members of the U.S. Navy Marine Mammal Program, the dolphins are part of a team being assembled on both sides of the border aimed at capturing live vaquitas — something that has never been accomplished. For an international group of scientists determined to save the species from near-certain extinction, it represents a final hope.

Spearheaded by Mexico’s Secretariat of Environment and Natural Resources, the plan involves removing vaquitas from the open water in their habitat in the Upper Gulf of California and keeping them safe from illegal gill nets, where they often end up as by-catch and drown.

A group of experts, including porpoise and veterinary care specialists, is expected to attempt the capture in the spring. It is unknown whether the small sea mammal would even survive captivity.

The operation “has to be done in a very careful, staged manner,” said Barbara Taylor, a conservation biologist at the National Oceanic and Atmospheric Administration’s Southwest Fisheries Science Center in La Jolla.

Related: The Most Unexpected Animals To Have Served In War »

Scientists say the vaquita population has dwindled over the past two decades — from 567 in an initial survey in 1997 to fewer than 60.

Despite a massive two-year plan launched in April 2015 by Mexican President Enrique Pena Nieto’s administration that includes an expanded ban on gill-net fishing in the porpoise’s habitat, the vaquita population has continued to fall — largely because of the rampant illegal fishery for totoaba, a large fish whose swim bladders fetch exorbitant prices in China.

The new approach would involve placing vaquitas inside a protective pen off the coast of San Felipe, with the hope that they might have a better chance for survival. If all goes well, they also might breed and reproduce.

“We can’t afford to be slow about this,” Taylor said. “We have to give this our mightiest effort as quickly as possible.”

Based in San Diego, the Navy Marine Mammal Program uses dolphins and sea lions for a range of tasks, from finding and removing underwater mines to detecting clandestine swimmers and divers in restricted areas.

Dolphins are skilled at locating things beneath the surface through echolocation, or sonar, which allows them to interpret the echoes of sound waves, as well as through their capacity for directional hearing underwater.

The operation planned for May is the latest in a series of efforts aimed at protecting vaquitas, a small porpoise that lives only in the rich and turbid waters of the Upper Gulf of California. The animals, which must surface to breathe, not only are rare but also extremely shy and difficult to spot, as they splash little, travel in small groups and avoid boats.

In recent days, leaders of the World Wildlife Fund and the Sea Shepherd Conservation Society have spoken out against the plan.

“Removing the vaquita will allow the fishermen to intensify their exploitation of the endangered totoaba fish,” Capt. Paul Watson, Sea Shepherd’s founder, wrote on his Facebook page.

But defenders say the plan is worth the effort — and the risk.

NOAA’s Taylor said even as the vaquita capture plan moves forward, enforcement efforts and other programs also must continue. “It’s not a situation where you can give up on enforcement, and give up on getting nets out of the water.”