Two U.S. Navy aircraft carriers are conducting dual carrier operations in the Pacific for the second time in a week 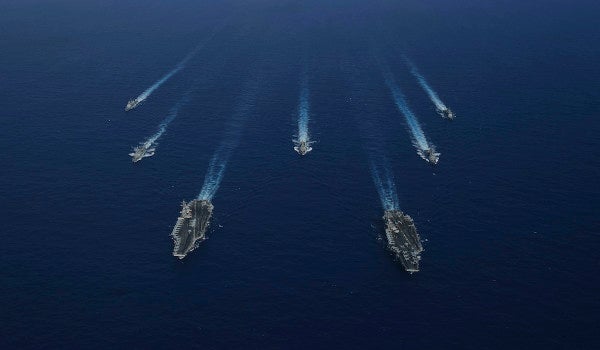 Two U.S. Navy aircraft carriers are conducting dual carrier operations in the Pacific for the second time in a week.

Rear Adm. George Wikoff, the Carrier Strike Group 5 commander, said in a statement that “we aggressively seek out every opportunity to advance and strengthen our capabilities and proficiency at conducting all-domain warfighting operation.”

“Dual carrier operations,” he continued, “demonstrate our commitment to regional allies, our ability to rapidly mass combat power in the Indo-Pacific, and our readiness to confront all those who challenge international norms that support regional stability.”

The US has repeatedly accused China of challenging international norms through aggression and coercion, especially in the South China Sea. The rhetoric surrounding recent operations is similar to that used for freedom-of-navigation operations and bomber overflights in the contested waterway.

The ongoing dual carrier operations come amid heightened U.S.-China tensions in the South China Sea, where both the U.S. Navy and Air Force has been very active in recent months and where the U.S. and Chinese militaries have had a number of “risky” run-ins.

The Department of Defense said in May that it is “concerned by increasing, opportunistic activity by the PRC to coerce its neighbors and press its unlawful maritime claims in the South China Sea, while the region and the world is focused on addressing the COVID-19 pandemic.”

In addition to warning rivals, the US military is also clearly projecting strength after a coronavirus outbreak aboard the USS Theodore Roosevelt unexpectedly upended its Indo-Pacific deployment and forced it into port, where it remained for nearly two months.

But, now the U.S. Navy has three carrier strike groups operating in the region.

As China builds up the People's Liberation Army Navy, it is also building aircraft carriers. It currently has two aircraft carriers — one a refitted Soviet vessel and the other a homegrown copy of the other commissioned last year.

China regularly asserts that its military is for defending China's interests, as well as supporting global peace and stability.

Commenting on the dual carrier operations, Rear. Adm. James Kirk, the Carrier Strike Group 11 commander, said that “only the U.S. Navy can integrate a carrier strike force on this scale and consistently project power to protect freedom of the seas.”

“These operations are what keep us ready to respond to any contingency,” he said.

The last dual carrier operations in the Indo-Pacific prior to the most recent two was in 2018, when the USS Ronald Reagan and the USS John C. Stennis carrier strike groups conducted operations together in the Philippine Sea.