Sitting in his air-conditioned hotel room, Petty Officer 2nd Class Marcus Salmon began sweating profusely. As he was overtaken by... 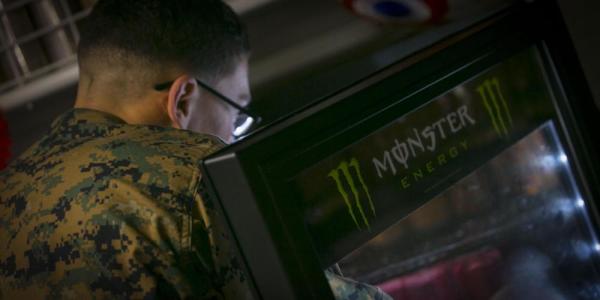 As he was overtaken by body tremors, he could barely muster enough energy to crawl out of his bed. After spending a few minutes with his head in a freezer to cool down, he called a co-worker, who was already on her way to pick him up for work, and asked her to bring him some food and a drink.

“After I called her, I basically crawled over to the door,” he said. “I opened it up and crawled back over and just sat there.”

He didn’t know what was wrong with him. He would later learn that the culprit was his daily consumption of energy drinks.

With focus increasing on the Navy’s long work schedules and sleep deprivation after collisions that resulted in a combined 17 deaths aboard two ships, the service’s medical professionals are warning sailors about the dangers of excessive energy drink intake.

Energy drink abuse has long been reported as a problem within the services, particularly in combat zones. A Centers for Disease Control and Prevention study in 2010 showed that soldiers and Marines deployed to Afghanistan who consumed three or more energy drinks per day were more likely to sleep less than four hours per night, and more likely to fall asleep during duty.

The Navy’s recent accidents led senators to question whether sleep deprivation might be partially to blame. Sen. John McCain asked Chief of Naval Operations Adm. John Richardson last month whether some sailors were working 100-hour weeks aboard ships, to which Richardson replied, “I will not deny that.”

Besides the potential for hindering operations, excessive energy drink use poses long-term health problems for servicemembers.

“The No. 1 thing is cardiac problems,” said Lt. Matthew Farnham, health promotions coordinator at the Bahrain naval clinic. “So, you’re looking at arrhythmias. You’re looking at long-term heart enlargement, because after a while your heart’s beating at such a speed that over time your heart can enlarge, and that can cause problems over time.”

The Navy has long had a reputation for running on caffeine. Years ago, it seemed aboard a ship that half the crew had a coffee cup in their hands. Since ultracaffeinated beverages hit the shelves, the younger generation seems to prefer a quicker pick-me-up and a sweeter taste.

Related: How A Local Energy Drink Became An Icon Of The Iraq War »

“The marketing is geared toward those younger guys,” Farnham said. “And then we supply — if you go to any of the (exchange stores) it’s there and there’s tons of it.”

Energy drinks were part of Salmon’s daily routine for more than five years, with few days off. He said life aboard his ship years before the recent incident helped him form the habit.

“I would wake up in the morning, stop by the store and grab a NOS,” he said. “I drink one of those, maybe drink another one during the day, depending on how long the work day was. If I knew it was going to be a long work day I’d get the one liter can of it.”

Salmon said he knows many other sailors who ingest the same amount or more daily. A co-worker on the ship showed him his own cache.

“He’s got a little spot for socks and shirts, and he’s got a whole larger spot dedicated to nothing but energy drinks,” Salmon said. “I started looking around and it seems like that’s a common trend.

“Just the work schedule, you know,” Salmon said. “Long hours, short break, long hours, so you got to keep going.”

Salmon had just arrived at his new duty station when the tremors began. He hadn’t had his usual energy drink intake.

Food helped a little. He was able to walk the short distance to the base medical clinic, but they immediately sent him to the local hospital.

“Once I got there they thought I had diabetes, because my sugar level was at like 256,” Salmon said.

Salmon is a fit, healthy-looking guy. He goes to the gym regularly. He has a relatively healthy diet. He had never been told he had high blood sugar before.

The hospital kept him overnight. He later called his mother, a nurse, to tell her what happened. She mentioned that he might be withdrawing from energy drinks.

“Sure enough, I looked it up online and the symptoms seemed to match,” he said.

Many sailors have no idea how much caffeine they consume in a day. Pre-workout drinks and supplements are also very popular and can cause similar problems.

“It’s not just the energy drinks, but a lot of these pre-workouts are just chock full of caffeine,” Farnham said. “Who knows what could happen (to Salmon) after consuming caffeine like that after a couple of years, especially to his heart?”

Salmon now closely monitors his caffeine intake, but he says the problem among other sailors isn’t going away.

“The amount of work with the amount of sleep that you get — honestly we don’t have a choice,” he said. “We have to have something to keep us up, to keep us going.”