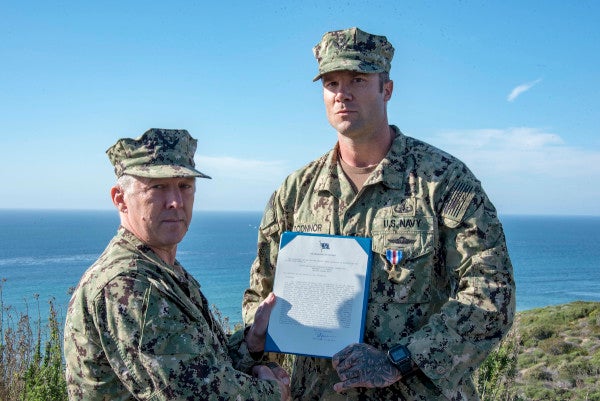 An Imperial Beach-based chief explosive ordinance disposal technician was awarded the Silver Star Medal during a ceremony at Naval Base Point Loma Thursday.

It is the 3rd-highest award in the Navy for bravery in combat.

Matt O'Connor, an EOD chief assigned to Explosive Ordnance Disposal Mobile Unit 11, was deployed to Iraq with a special operations task force in April 2019. His team entered an enemy-held village and came under fire, according to a Navy news release.

“After returning fire, Chief O'Connor noticed a teammate wounded on the ground and exposed to the enemy,” the award citation says. “With utter disregard for his own safety, Chief O'Connor advanced forward, carried his wounded teammate to cover and then rendered lifesaving medical treatment while coordinating suppressive fire.”

O'Connor again exposed himself to fire to retrieve another wounded person, a U.S. linguist, his award citation says.

“He then carried the first teammate under continuous enemy fire through difficult terrain laden with improvised explosive devices to reach the vehicle pick up location,” the citation says.

O'Connor received his medal from Vice Adm. Scott Conn, the commander of the Navy's 3rd Fleet.

“Chief O'Connor's courageous actions last April illustrate the combat-credible sailors we have in the U.S. Navy,” Conn said in a statement. “He displayed extreme courage and toughness under fire in protecting his teammates and ensuring their safety. I would be hard-pressed to find a stronger example of honor, courage and commitment than EODC O'Connor.”

In a statement, O'Connor credited his team.

“I am honored to receive the Silver Star and appreciate the recognition; however, I want people to know that it took a whole group of guys to ensure everyone returned safely,” he said. “I was not the only one out there, and this is reflective of a team effort.”

O'Connor is originally from Bellingham, Washington, and enlisted in the Navy in 2008. He reported to his current duty station in Imperial Beach in November 2017.