"Consider it trauma care on wheels." 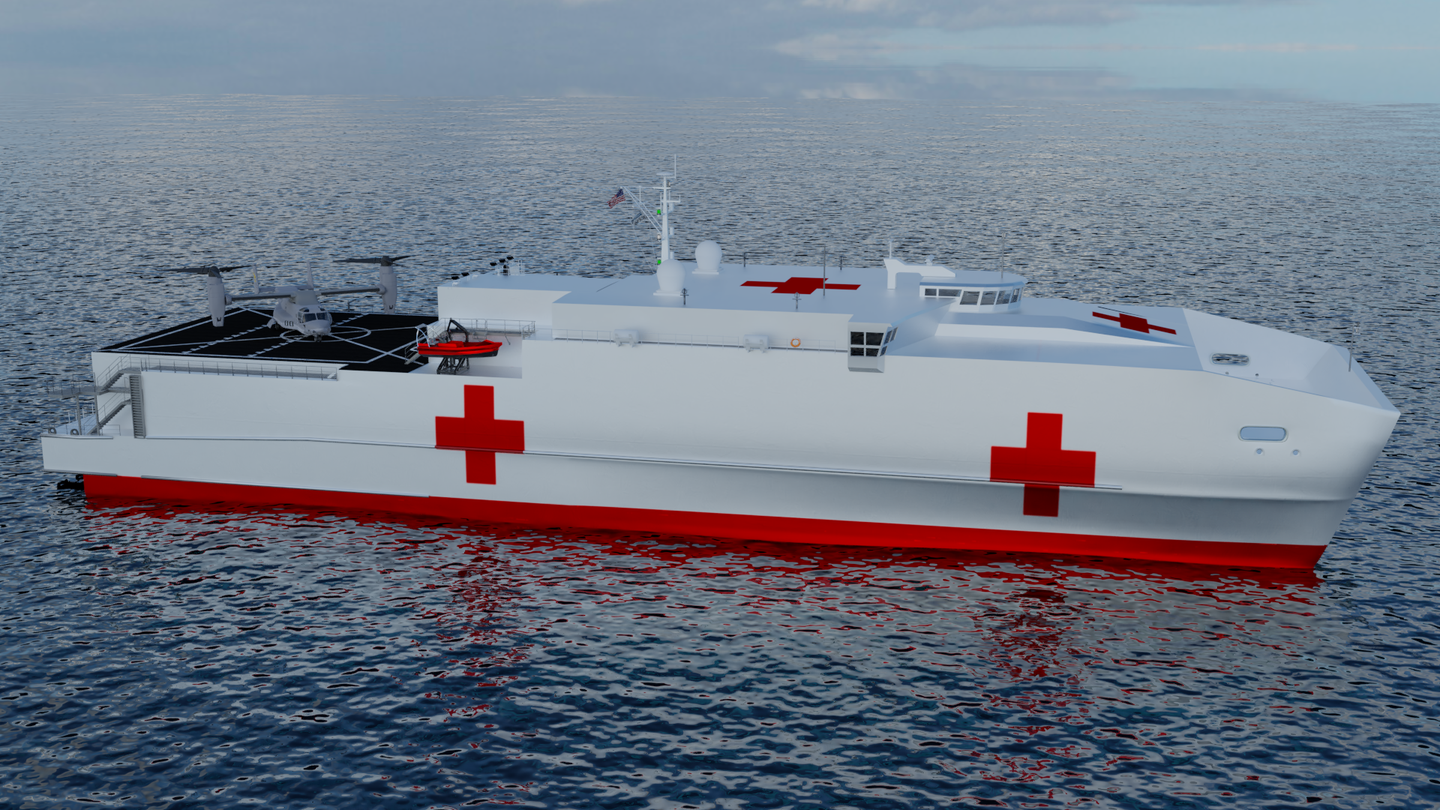 Tucked inside the recently passed Defense Department budget for 2023 is funding for a new kind of Navy medical ship – one built to operate more like an ambulance than a hospital.

The ship’s builders and Navy officials say this reimagined vessel, the Expeditionary Medical Ship, is especially designed for easy movement and rapid response in the shallow littorals and vast expanses of a future operating theater like the Pacific. And the service is working to develop a complement of skilled medical personnel trained and ready to deploy onboard these ships to provide triage care almost anywhere in the world.

To be built by Austal USA, the Expeditionary Medical Ship will be based on the Expeditionary Fast Transport, or EPF, a catamaran used by the Navy for personnel transit within coastal operational theaters such as Central and South America. The first EMS, EPF-17, is supposed to be delivered to the Navy by December 2026, according to budget documents; the service so far has greenlighted funding for three of them.

Ultimately, the Navy wants to have a trio of platforms that work together to provide seamless care anywhere in the world. The service is developing a concept, T-AH(X), to replace its aging hospital ships, and, in the meantime, adding EMS and an even quicker connector platform, the EPF Flight II.

These updates to Navy medicine afloat are all in anticipation of a future, high-stakes conflict against a peer adversary in a place where resources are scarce and rapid response is essential. This future environment will require what the Navy calls “Distributed Maritime Operations,” or DMO.

“Combat in a contested maritime environment will generate casualty rates both at sea and ashore much higher than recent experiences and a different mix of casualties. Mass casualties will require large-scale patient movement,” a briefing slide provided by the Navy’s Bureau of Medicine (BUMED) states. “Longer patient movement timelines will require medical care en route. The medical logistics system will be disrupted. Blood supplies will need to be readily available and rapidly distributable.”

Austal previously contracted with the Navy in 2021 for the EPF Flight II, which is expected to deliver the first of at least three hulls, USNS Cody (EPF-14), later this year. While the Flight II will be fast, traveling at up to 33 knots or 37 miles per hour, and capable of receiving and treating patients, with a short flight deck for the MV-22 Osprey and space for more than 100 medical personnel and 18 intensive care unit beds, the EMS will provide even greater and more sustained medical capability, Larry Ryder, vice president of business development at Austal, told Sandboxx News.

In an interview earlier this year, Rear Adm. Darin Via, deputy chief of BUMED, said the service was developing a new expeditionary medical unit, EMU-28, that will deploy on the EPF Flight II and go ashore as needed. This will help facilitate the smaller, faster ship’s role as a roll-on, roll-off connector platform that can provide vital medical care while transporting patients to a larger facility, he said.

“We’re developing the people, the training, people to deploy on that ship to be able to meet its mission,” he said. “With the mission being a surgical and medical capability, but then it also serves as a ship again to get across those long distances.”

According to specifics provided by Austal, EMS will be slightly larger than the EPF, about 110 meters to its 103. A slightly redesigned hull will provide additional stability, and a shallow draft of 15 feet, or about 4.5 meters, will allow for “direct access to shallow, austere ports,” according to the builder.

“As the Navy continues to move to distributed operations, a smaller, faster, more agile platform like the EMS provides that linkage between the forward operating forces and a rear echelon, a medical facility or potentially another platform with more medical capability,” Ryder said. “So we think it’s really delivering something that is critical to support the warfighters.”

It’s a vastly different capability than exists on the service’s two hospital ships, which have deployed around the world for humanitarian missions since their commissioning in 1986. The USNS Mercy and Comfort, which originated as San Clemente-class oil tankers, are designed to maximize capacity and stability. With 1,000 beds apiece, they’re the largest ships serving the Navy apart from its nuclear-powered carriers. And they move at average speeds of less than 12 knots, or about 14 miles per hour.

“You can think of the current Comfort and Mercy being the big downtown city hospital. They’re extremely capable, but they are relatively slow,” Ryder said, adding that the ships’ deep 10-meter draft prevents them from entering some ports and that they’re getting more expensive to deploy as they age.

Current factsheets for EMS indicate fully loaded top speeds of more than 18 knots, or about 20 miles per hour. The ship can maintain that speed, according to provided specifications, over more than 5,000 nautical miles, nearly the distance from Beijing to San Francisco.

According to provided specs, EMS will have three operating rooms and 60 medical beds, separated into acute care, acute isolation, ICU, and ICU isolation spaces. Two 11-meter rigid-hulled inflatable boats allow for the transfer of patients from other ships or water rescue; the flight deck has room for a single V-22, or an H-53 or H-60 helicopter. Medical spaces, according to Austal, will be equipped for needs ranging from rapid stabilization of multiple trauma casualties; OB/GYN care; combat search-and-rescue; and blood banking, among other services.

In addition to the humanitarian assistance, disaster relief, and non-combatant evacuation missions currently supported by today’s hospital ships, EMS will be able to support special operations and at-sea personnel recovery from damaged warships.

Ryder emphasized that EMS would function as a key element of future medical operations at sea.

“The EMS, consider it trauma care on wheels, for running around the city,” he said. “It’s high speed, it’s got a lot of the capabilities that are on the hospital ships, but it’s not designed to handle large volumes of patients for an extended period of time. It provides a link and a continuum of care, but it puts a high degree of medical capability forward to where it can do the most good, saving lives for our operating forces.”