The Navy is researching a new coating that could be used on submarines and other ships to help them glide... 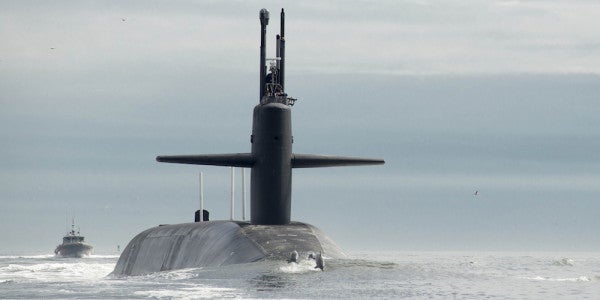 The Navy is researching a new coating that could be used on submarines and other ships to help them glide more easily through the water, reducing fuel costs.

The substance, known scientifically as a superhydrophobic coating, repels water, reducing the drag created by a hull moving through the water. The Navy says it could save millions of dollars in ship fuel costs.

The coating has millions of pockets of air trapped underneath, which essentially create an air film that causes water to slide off a surface. That results in lower friction and significantly reduces drag.

“As much as 60 percent of fuel can be used on drag, maybe higher depending on speed. We have the potential of cutting that significantly,” said Anish Tuteja, an associate professor of materials science and engineering at the University of Michigan, whose research the Office of Naval Research is sponsoring.

These repellent coatings aren't new. Tuteja's group has been doing this research for more than a decade, but it's hard to find a solution that's durable, especially when the environment is as harsh as the ocean.

“For this particular application, you have to get the texture exactly right. If the pores are too big, the water can essentially go into the pores and then it gets in and the drag actually increases, and if the pores are too small it doesn't create enough drag, so it had to be in the right regime to create drag,” Tuteja said.

Tuteja and his team analyzed hundreds of chemical combinations before finding the right mix.

The goal is to make the coating last for several years, Tuteja said, and it could be applied by a spray similar to how paints are currently applied to the hull of a ship. The coating has a rough white surface because it has to be textured to create the air pockets, Tuteja said.

His team is also working on coatings that repel other liquids beside water, like oil, alcohol, and even peanut butter. Those coatings are being tested for a range of Pentagon uses such as for soldiers' uniforms and protective eye wear.

While there are various commercial applications for these coatings like preventing stains from liquids such as soda, juice, and alcohol on carpets and clothing, coatings for Navy application require “a lot more proving out,” Tuteja said. It would be at least a few years out before they go onto ships.