The U.S. Navy broke with its tradition of hyping up F-35 deployments by sending of the USS Essex jump-jet carrier... 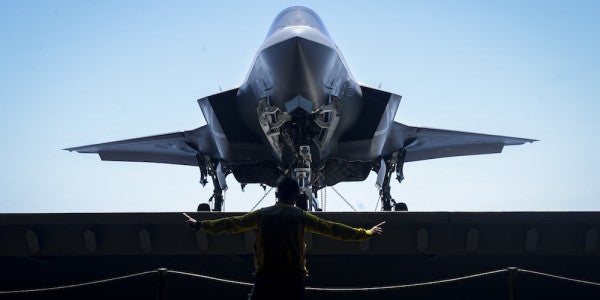 The U.S. Navy broke with its tradition of hyping up F-35 deployments by sending of the USS Essex jump-jet carrier into the Western Pacific with a deck full of the revolutionary fighter jets — and it could signal a big change in how the U.S. deals with its toughest adversaries.

When the USS Wasp became the first small deck aircraft carrier to deploy with U.S. Marine Corps F-35Bs, the media was in on it. But the Essex's departure marks a change, as the Navy broke its usual protocol and only announced the deployment after the ship departed, the USNI News notes.

The Navy regularly deploys capital ships like small and big deck carriers for patrols around the world, but has only twice ever deployed ones like these.

Related: The Navy Just Sent Its First-Ever F-35 Carrier To The Pacific »

The F-35 has become the most expensive weapons system in history and earned its share of criticism along the way as costs ballooned and deadlines fell through. The Marine Corp's F-35B is designed to land vertically and take off from short runways, like an amphibious assault ship, and will replace the AV-8B Harrier in ground and air attack missions; the Navy's F-35C has a tailhook to snag an arresting cable and land on an aircraft carrier.

Naturally, the U.S. military would keenly show off the jets, which they bill as a revolution in aerial combat due to their stealth design and advanced sensors and controls, but it seems they've opted to skip the public relations coup in exchange for something a bit more operational.

The Navy now actually wants to change the expectation of the media with regards to ship deployments to the Pacific, sources told USNI News.

The U.S. military usually prides itself on publicizing its ship deployments and often states that its carrier deployments are drawn up apolitically and months ahead of time, but insisting on some level of secrecy betrays that.

What does the Navy have to hide in the Pacific?

The U.S. has major adversaries in the Pacific, namely China and to a lesser extent, North Korea.

It makes sense that with dialogue underway with North Korea, the U.S. would want to quiet down big deployments to the Western Pacific, and a high profile deployment of next-generation stealth jets could seriously spook North Korea.

But it's China's navy that poses the biggest threat to the U.S., and possibly the reason the U.S. is staying quiet.

When the USS Ronald Reagan, the U.S.'s forward-deployed aircraft carrier in Japan, patrolled the South China Sea, which China unilaterally claims as its own in defiance of international law, the U.S. said very little about it. Repeated requests for comment from Business Insider went ignored.

The U.S. uses its Navy to challenge what it calls excessive maritime claims of dozens of nations around the world in passages called “freedom of navigation operations.” Basically, if a country claims an excessive amount of maritime territory, the U.S. usually sails a destroyer through to inform them their claims are not recognized.

China detests these patrols as a challenge to its sovereignty and makes a big deal out of them. For the U.S., it's better if the challenges to China's claims are the norm and not a news story. Some observers have speculated the U.S. wants to send a message to China's military leadership without the publicity that may compel them to escalate.

By keeping quiet high profile deployments to the Pacific, the U.S. could be signaling it's getting ready to put the ball back in China's court with high-end military hardware checking it, and disputes handled between navies rather than via press releases.