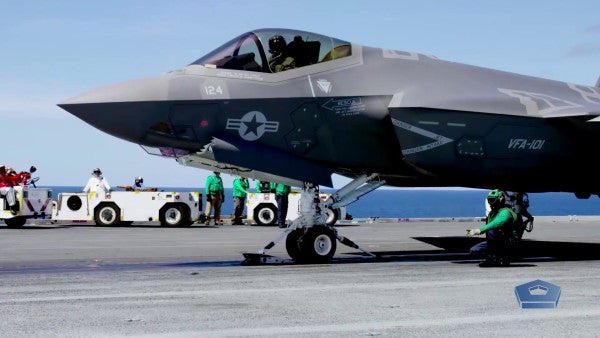 EGLIN AFB — With gratitude for its seven years at Eglin and enthusiasm for the future in California, the Navy's first F-35C strike fighter squadron furled its flag in a Thursday morning ceremony.

The F-35C is the “carrier variant” version of the F-35 stealth fighter jet, designed specifically to operate from aircraft carriers.

“Today, we turn into the wind and launch on an aggressive path to deploy the F-35C,” said Navy Capt. Max G. McCoy, commander of the Joint Strike Fighter Wing.

McCoy spoke as VFA-101, informally known as the “Grim Reapers” squadron, was deactivated to become part of VFA-125, a strike fighter squadron at California's Naval Air Station Lemoore. VFA is a naval designation with the “V” denoting fixed-wing aircraft, the “F” standing for fighter, and the “A” meaning “attack.”

In the Navy, deactivation is different from decommissioning, and it is possible the VFA-101 Grim Reapers will be resurrected. In fact, Thursday's ceremony marked the third time that VFA-101 has been deactivated. Throughout its history, the squadron has consistently trained pilots in the most advanced aircraft of their day, including the F-4 Phantom and the F-14 Tomcat.

In the meantime, said Rear Adm. Roy J. Kelley, commander of Naval Air Force Atlantic, “the legacy (of VFA-101) will live on, and I have no doubt that one day we will see it in an operational capacity once again.”

Moving the Grim Reapers to NAS Lemoore is designed to consolidate the Navy's F-35C operations, said Lt. Cmdr. Lydia G. Bock, public affairs officer for the Joint Strike Fighter Wing, as the Navy focuses on getting the fifth-generation fighter jet out to sea. In part, Bock said, Thursday's ceremony marked an opportunity for “a big thank you” to the Air Force, to Eglin Air Force Base and Eglin's 33rd Fighter Wing, and to the community for their support of VFA-101 since its May 2012 arrival at the base.

At Eglin, Kelley said, the Grim Reapers did “incredible work” that delivered “a game-changing capability” to the Navy. But he said consolidating Navy F-35 operations at NAS Lemoore will support the development of Navy F-35C squadrons and assist in the testing and evaluation of the carrier-variant fighter jet.

That work is particularly vital in light of Russia and China developing their own next-generation fighter jets, Kelly added.

“This is why the work you have been doing here is so important,” Kelley told the crowd of VFA-101 personnel and contractors gathered in a hangar at the departing squadron's Eglin headquarters, in front of the last two Grim Reapers' F-35Cs remaining at the base. The two aircraft were scheduled to leave Eglin at 1 p.m. Thursday.

Also speaking Thursday was Navy Cmdr. Adan Covarrubias, commander of VFA-101. After thanking Eglin personnel, particularly Col. Paul Moga, commander of the 33rd Fighter Wing, for their support during the Grim Reapers' stay at Eglin, Covarrubias praised the personnel under his command, calling them “the finest group of sailors and Marines anyone could ever ask for. I thank you.”

As part of Thursday's ceremony, the VFA-101 flag was presented to members of the family of the late Navy Vice Adm. James Flatley, who became commander of the first iteration of the Grim Reapers in 1942. The family will keep the flag until VFA-101 is reactivated.

In another tribute to the unit's history, Flatley's name was affixed to one of the departing F-35s, while the other was named to honor the late Capt. William Richard Kane, another former Grim Reapers commander. Both men were recipients of the Navy Cross and the Distinguished Flying Cross.

Part of the office and hangar space at Eglin being vacated by the Grim Reapers is already being used by airmen from Tyndall Air Force Base and F-22 Raptor fighter jets displaced by last year's Hurricane Michael, which devastated their Panama City base.

The remaining VFA-101 space could be used by a new F-35A training squadron (the F-35A is the Air Force version of the jet) for which Eglin is the Air Force's preferred location, according to Lt. Savannah Stephens, public affairs officer for the 33rd Fighter Wing.

If Eglin is chosen for the new F-35A training squadron, it would be the second such squadron at the base. The new squadron, which could bring in as many as 500 airmen, could be operational by 2023, with jets beginning to arrive in 2021, according to Team Eglin Public Affairs.

The departure of the Navy F-35C squadron from Eglin comes four years after the Marine Corps moved its F-35B squadron (the F-35B is the short takeoff/vertical landing version of the jet) from Eglin to South Carolina's Naval Air Station Beaufort.