Fighter pilots who go through the U.S. Navy's elite air-combat training center commonly known as TOPGUN are among the best in the world, but that doesn't mean they don't experience fear 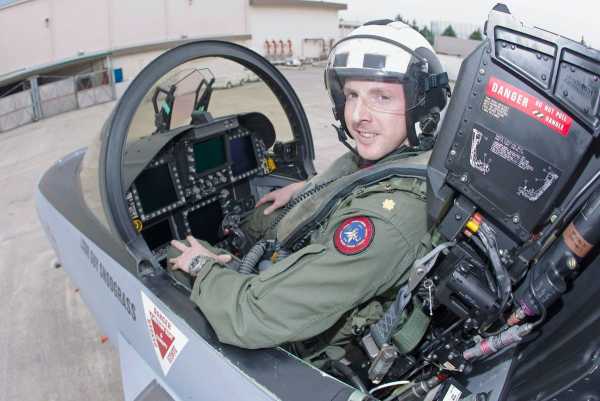 Fighter pilots who go through the U.S. Navy's elite air-combat training center commonly known as TOPGUN are among the best in the world, but that doesn't mean they don't experience fear. In the most terrifying of moments, it's their training and their instincts that keep them alive.

The retired Navy Cmdr. Guy Snodgrass, a former TOPGUN instructor who is the author of the new book TOPGUN's TOP 10: Leadership Lessons from the Cockpit, shared with Insider one of the most terrifying moments of his career.

He was a junior officer at the time, and his fighter squadron, which he hadn't been with very long, was doing carrier-qualification exercises on an aircraft carrier off the coast of Virginia. On his way back to the carrier, his flight lead decided to execute a maneuver known in polite conversation as the “Sierra Hotel Break.”

“I'll never forget,” Snodgrass told Insider. “My flight lead wanted me to come in and overfly the aircraft carrier going about 600 miles per hour.”

When executing a Sierra Hotel Break, he explained, “you go screaming over the aircraft carrier, and then right as you reach the end of it, that's when you peel away and come around to land.”

“It's like a real loud show of force,” he said. “It gets everyone on the flight deck excited.”

So, the flight lead made his flight over the carrier, and then it was Snodgrass' turn.

“As I begin my turn about 15 seconds later, I roll the aircraft and it goes into a mechanical-failure mode. The plane rolled almost completely upside down and started flying right toward the water,” he said, noting that he was flying at only about 800 feet when his fighter started to dive.

The maneuver itself was not the cause of the problem, Snodgrass said, but “definitely meant that we were moving so fast that when the emergency did occur, it put me in extremis very quickly.”

“The flight controls weren't very responsive,” he continued. “So, there I was, struggling with the control stick, trying to get this plane back with the wings underneath me and then pull away from the water.”

“This is where your training comes in,” Snodgrass said, explaining the importance of staying calm under pressure, something he writes about in his new book.

“It really was a frightening experience,” he said, “but you control your emotions, you climb up to a safe altitude, determine the nature of your emergency, and then work as a team to get your plane safely on deck.”

Nearly rocketing into the sea might be enough to make some call it a day, but Snodgrass says the important thing is that you learn from it and keep flying.

“A year or two later, when you have some other emergency, you realize there is nothing to be overly concerned about,” he said. “I've been here before. I have the experience. I'm going to leverage that to stay calm under pressure and ensure that I'm making smart decisions and not simply emotional decisions.”

Snodgrass served the US military for two decades, and during that time he flew combat missions overseas, served as a TOPGUN instructor, and worked closely with the secretary of defense at the Pentagon.

TOPGUN's TOP 10: Leadership Lessons from the Cockpit draws on his experiences and the lessons learned, including some learned the hard way.

In a section on staying calm under pressure, Snodgrass recalls a terrifying incident during a training dogfight over Death Valley National Park in California.

“I was in a tight left turn, flying at sixteen thousand feet at full afterburner … when my airplane suddenly shuddered,” he wrote. “A second later, the headphones in my helmet crackled to life. 'Engine fire, right … Engine fire, right.'” It was an instructor in another aircraft alerting him to a serious problem.

Fire was pouring out of the right engine on his F/A-18C Hornet. “My right engine had flatlined at zero rpm, so it was no longer operational,” Snodgrass wrote, “and the right fire warning light was glowing bright red.”

Rather than panic, he turned to his training.

In the air, “there are 20 emergencies a pilot can encounter that are so dangerous that aviators are required to memorize a list of steps called 'immediate action items' to help them survive,” Snodgrass said. “An engine fire is one of those potentially deadly emergencies.”

After extinguishing the fire to keep his fighter jet from exploding, he steadied the aircraft, which was pulling to one side and steadily losing altitude, while preparing for an emergency landing at the nearest airfield.

After landing safely, he wrote, “only then did I notice my legs were trembling — the most obvious sign of the adrenaline that was coursing through my body.”

The fear was there, but he didn't let that stop him from keeping his cool and doing what was necessary to stay alive.

“I didn't realize it at the time, but the experience would forever pay dividends as a I progressed throughout my career,” Snodgrass continued.

“Whether handling high-stress situations in combat, intercepting Russian bombers off the coast of South Korea, or 'flying a desk' in the Pentagon, staying calm while under fire always proved to be a valuable skill.”