The commander and executive officer of a U.S. Navy destroyer were relieved from command as punishment for a collision with... 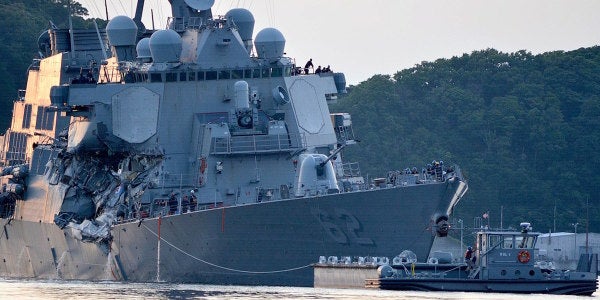 The commander and executive officer of a U.S. Navy destroyer were relieved from command as punishment for a collision with a container ship off Japan that killed seven sailors in June, one of the worst naval accidents in years, the Navy said Thursday.

Cmdr. Bryce Benson, commander of the Fitzgerald, and Cmdr. Sean Babbitt, the ship’s second-in-command, were fired from their positions because the Navy “lost trust and confidence in their ability to lead,” Adm. William F. Moran, the vice chief of naval operations, told reporters.

The pair were among about a dozen sailors on the destroyer, including the top enlisted sailor, who could face discipline for the June 17 collision with the Philippine-flagged merchant vessel ACX Crystal about 50 nautical miles southwest of the Japanese port of Yokosuka.

It’s still unclear why the two huge ships didn’t see and avoid each other — that is subject to another investigation — given modern radar and other sophisticated tracking marine gear, especially on the warship.

But the Navy said Vice Adm. Joseph Aucoin, commander of the 7th Fleet, had enough information to assign punishments for the collision.

Seas were calm and the pre-dawn sky was still dark with scattered clouds when the ACX Crystal, which is 728 feet long and weighs 29,000 tons, suddenly smashed into the Fitzgerald, which is 505 feet long and 9,000 tons.

The crash carved a 13-by-17-foot gash into the Fitzgerald’s forward starboard side above and below the water line. Water quickly flooded a large room where 42 sailors lay asleep in their berths, as well as a machinery space and the radio room.

Seconds after impact, sailors jolted awake in Berthing 2 yelled “water on deck” and “get out,” according to a 41-page report on the deadly incident released by the Navy.

But seawater poured in so fast that it was already waist deep before the 42 sailors first tried to climb out. Thirty-five survived; seven did not.

Saving the ship and getting it back to Yokosuka, home to the 7th Fleet, took unusual efforts, the report said,

“Through their swift and, in many cases, heroic actions, members of the Fitzgerald crew saved lives,” the report said.

“No damage control efforts, however, would have prevented Berthing 2 from flooding completely within the first two minutes following the collision, or the deadly circumstances in that situation.”

The Japanese Coast Guard sent vessels to assist in rescue efforts while Japanese helicopters and a U.S. patrol aircraft flew near the destroyer.