The US Navy's first Black female fighter pilot has earned her wings. 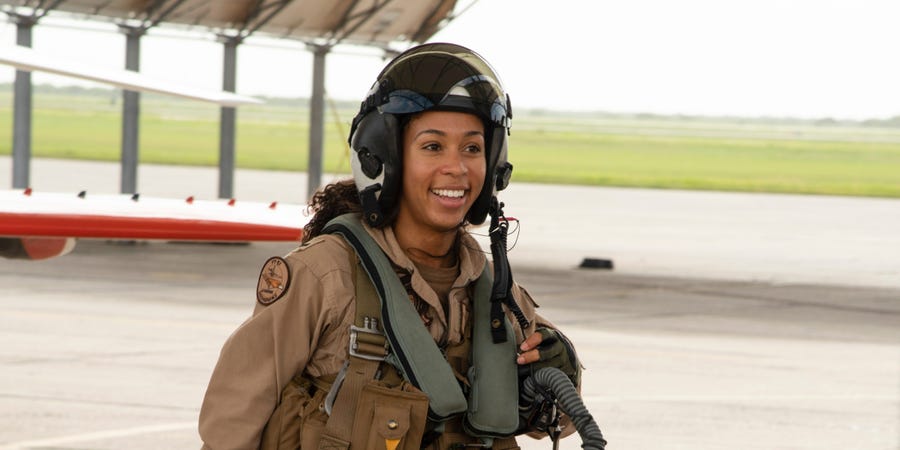 The US Navy's first Black female fighter pilot has earned her wings, the service said.

The Chief of Naval Air Training celebrated the officer for her achievement on Twitter, writing: “BZ to Lt. j.g. Madeline Swegle on completing the Tactical Air (Strike) aviator syllabus. Swegle is the @USNavy's first known Black female TACAIR pilot and will receive her Wings of Gold later this month. HOOYAH!”

According to the Navy, which has only released limited details on this aviator, Swegle is currently assigned to the Redhawks of Training Squadron (VT) 21 at Naval Air Station Kingsville in Texas.

The photos that accompanied the Navy tweet celebrating Swegle's historic achievement were taken following her final flight in the Tactical Air (Strike) program, a flight taken in a T-45C Goshawk training aircraft that can be seen clearly in one of the two photos.

It is unclear where Swegle will go next, but as a graduate of the TACAIR training program she will move on from training aircraft to Navy tactical planes, like the F/A-18E/F Super Hornet and F-35C Lighting II Joint Strike Fighter.

Swegle, a 2017 US Naval Academy graduate, follows in the footsteps of other remarkable women in the armed forces, such as the late Capt. Rosemary Mariner, an aviation pioneer who became one of the first female Navy pilots to fly Navy tactical aircraft in 1974.

Other outstanding predecessors include Sen. Martha McSally, a retired Air Force Lt. Colonel who became the first female US military fighter pilot to fly in combat, and Lt. Cmdr. Brenda Robinson, who became the Navy's first Black female pilot in 1980.

Swegle's historic accomplishment comes as the Navy takes a hard look at discrimination amid growing nationwide concern about racial injustice and works to, as Navy leaders said last month, “identify and remove racial barriers and improve inclusion within our Navy.”