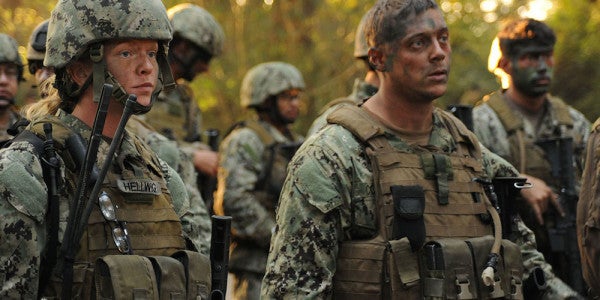 More than a year after a mandate for the Pentagon opened previously closed ground combat and special operations jobs to women, officials say the Navy has its first female candidates for its most elite special warfare roles.

Another woman, who sources say is a female midshipman now in her junior year at the Naval Academy, has applied for a spot in the SEAL officer selection process for fiscal 2018, which begins Oct. 1, and is set to complete an early step in the pipeline, special operations assessment and selection, later this summer, he said.

“That's a three-week block of instruction,” Dunbar said. “Then the will compete like everyone else, 160 for only 100 spots.”

A spokesman for Naval Special Warfare Command, Capt. Jason Salata, confirmed to Military.com this week that a single female enlisted candidate remained in the training pipeline for Special Warfare Combatant Crewman, or SWCC. The accession pipeline for the job, he added, included several screening evaluations and then recruit training at the Navy's Great Lakes, Illinois boot camp before Basic Underwater Demolition School training.

Salata also confirmed that a female midshipman is set to train with other future Naval officers in the SEAL Officer Assessment and Selection, or SOAS, course this summer.

“[SOAS] is part of the accession pipeline to become a SEAL and the performance of attendees this summer will be a factor for evaluation at the September SEAL Officer Selection Panel,” he said.

Because of operational security concerns, Salata said the Navy would not identify the candidates or provide updates on their progress in the selection pipeline. In special operations, where troops often guard their identities closely to keep a low profile on missions, public attention in the training pipeline could affect a candidate's career.

It's possible, however, that the first female member of these elite communities will come not from the outside, but from within. In October, a SWCC petty officer notified their chain-of-command that they identified as being transgender, Salata confirmed to Military.com.

According to Navy policy guidance released last fall, a sailor must receive a doctor's diagnosis of medical necessity and command approval to begin the gender transition process, which can take a variety of different forms, from counseling and hormone therapy to surgery. Sailors must also prove they can pass the physical standards and requirements of the gender to which they are transitioning.

These first female candidates represent a major milestone for the Navy, which has previously allowed women into every career field except the SEALs and SWCC community. A successful candidate would also break ground for military special operations.

Army officials said in January that a woman had graduated Ranger school and was on her way to joining the elite 75th Ranger Regiment, but no female soldier has made it through the selection process to any other Army special operations element. The Air Force and Marine Corps have also seen multiple female candidates for special operations, but have yet to announce a successful accession.

But by the time they make it to that final phase of training, candidates have already been weeded down ruthlessly. Navy officials assess prospective special warfare operators and special boat operators, ranking them by their scores on the Armed Services Vocational Aptitude Battery, or ASVAB, physical readiness test, special operations resiliency test, and a mental toughness exam. The highest-ranking candidates are then assessed into training, based on how many spots the Navy has available at that point.

“We assess right now that, with the small cohorts of females, we don't really know what's going to happen as far as expected attrition,” Dunbar, the Naval Special Warfare Center deputy commander, told DACOWITS in June.

Dunbar did say, however, that Naval Special Warfare Command was considered fully ready for its first female SEALs and SWCC operators, whenever they ultimately arrived. A cadre of female staff members was in place in the training pipeline, and the command regularly held all-hands calls to discuss inclusivity and integration.

“All the barriers have been removed,” he said. “Our planning has been completed and is on track.”

Salata said the Navy had also completed a thorough review of its curriculum and policies and had evaluated facilities and support capabilities to determine any changes that might need to be made to accommodate women. As a result, he said, minor changes were made to lodging facilities and approved uniform items.

Nonetheless, Salata said, “It would be premature to speculate as to when we will see the first woman SEAL or SWCC graduate. Managing expectations is an important part of the deliberate assessment and selection process; it may take months and potentially years.”