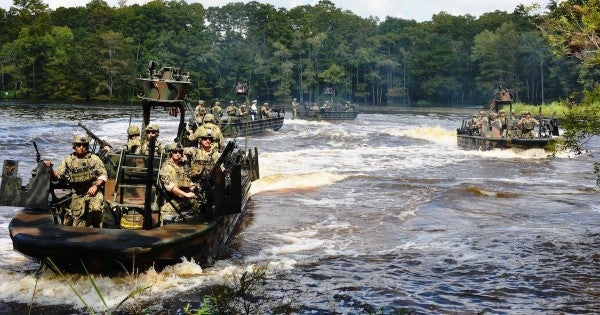 One of the Navy's smallest and most elite communities may soon have its first female members, Military.com has learned.

“[Naval Special Warfare] can confirm that as of Dec. 16, there are currently three women in various stages of the 37-week SWCC training pipeline,” NSW spokeswoman Capt. Tamara Lawrence said in a statement provided to Military.com.

The SWCC (pronounced “swick”) career field was closed to women until 2016, when a Pentagon order opened up all job fields, including those in special operations. Since 2016, NSW officials said, seven women have received SWCC contracts, although none have yet made it through the full training pipeline and joined a small-boat unit.

“Naval Special Warfare focuses on standards, not gender, when assessing for any training pipeline,” Lawrence said. “Additionally, Naval Special Warfare Center remains committed to providing a safe, fair and equally dignified training environment that will best prepare all SEAL and SWCC candidates for the extreme demands put upon them as members of a SEAL or Special Boat Team.”

And, like the SEALs, the training pipeline is at times hellish. The pipeline includes the standard two months of basic training at the Navy's only boot camp in Great Lakes, Illinois. This is followed by the two-month Naval Special Warfare Preparatory School program, which conditions sailors physically and mentally to prepare them for NSW Orientation in Coronado, Calif., according to information provided by NSW officials.

“There, candidates learn basic navigation and small boat seamanship skills in addition to focusing on physical conditioning and their ability to be safe and competent in the water,” Lawrence said. “The capstone for BCS is a 72-hour crucible testing the candidates' physical toughness and grit, which is modeled after the 'Hell Week' done by SEAL candidates.”

Only after completing selection do candidates enter the core of small-boat training: seven weeks of Basic Crewman Training, with instruction on combat casualty care, small arms and communications; and Crewman Qualification Training, 13 weeks of training on “seamanship and navigation, waterborne patrolling and how to plan and execute full mission profiles.”

In a brief to the Defense Advisory Committee on Women in the Services earlier this month, Lt. Grace Olechowski, force integration officer with Naval Special Warfare Command, said one female candidate had graduated NSW Preparatory School Nov. 29 and reported to NSW Orientation Dec. 2. Another, she said, was in training at NSW Preparatory School, and a third began boot camp Dec. 9. One more female candidate with a SWCC contract is set to report to boot camp in July, she said.

Of previous female candidates who have attempted the SWCC training pipeline, one made it to Basic Crewman Selection, but ended up not completing training, NSW officials said.

In all, officials said, there are now 101 students in the SWCC pipeline; historically, the course has an attrition rate of 60%.