The Navy and Marine Corps need to be a bit more short-sighted when assessing how many ships they need, the acting Navy secretary said this week 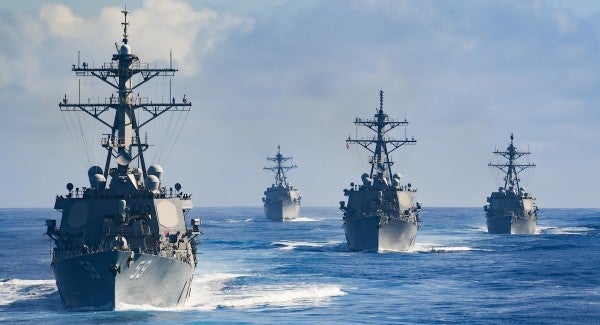 “I don't know what the threat's going to be 30 years from now, but if we're building a force structure for 30 years from now, I would suggest we're probably not building the right one,” he said Friday at a National Defense Industrial Association event.

President Donald Trump pledged to help the Navy reach that goal when running for office in 2016. He also signed that number into law in 2017 after lawmakers included a section in the 2018 National Defense Authorization Act that said the service would build up to 355 ships as soon as possible.

Modly has hinted that the next-force structure assessment, which Chief of Naval Operations Adm. Michael Gilday said could be complete within weeks, could go higher than the 355-ship number. And that will be in addition to the Navy's mysterious “ghost fleet,” the still-to-be-developed unmanned surface and underwater vessels that can operate largely without crews.

On Friday, Modly said basing the plans on a 10-year view of future threats is more realistic. Thirty years ago, he said, there was more concern about threats from Russia than China. Now, the Navy and Marine Corps are shifting their sights to a possible fight in the Pacific.

“It helps us understand what type of trajectory we should be on,” he said. “… What are the ships? What are those platforms? That sort of suggests the type of people you need, it suggests where they should be based, how you need to ramp up the industrial base, what type of weapons should they carry?”

The Navy and Marine Corps are working closely together on the new force-structure assessment, which is another shift in how the planning was done in the past. Gilday and Marine Commandant Gen. David Berger are pushing for stronger integration between the sea services to counter China's rise and activities in the South China Sea.

He also said the services are going to need a lot of small ships for distributed operations. In his planning guidance released last year, Berger said the service would no longer push the Navy to build 38 amphibious assault ships.

“A distributed maritime force … drives you toward more,” Berger said. “Smaller, but capable.”