The U.S. Navy has ordered 30 ships, likely including nuclear-powered aircraft carriers and submarines, to take to the seas as... 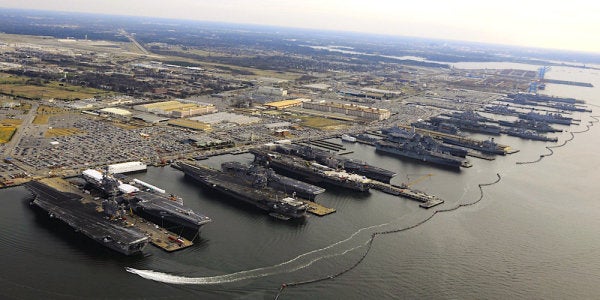 The U.S. Navy has ordered 30 ships, likely including nuclear-powered aircraft carriers and submarines, to take to the seas as Hurricane Florence approaches from the Atlantic with 115 mph winds.

The Navy issued a “sortie code alpha” or its strongest possible order to move ships immediately in the presence of heavy weather.

Navy ships weather rough storms all the time, and have been built to withstand hurricanes, but when moored to hard piers they're susceptible to damage or even grounding, should the mooring lines break.

“Our ships can better weather storms of this magnitude when they are underway,” said U.S. Fleet Forces Commander Adm. Christopher Grady said in a release.

“Ships will be directed to areas of the Atlantic where they will be best postured for storm avoidance,” another release read.

Naval Station Norfolk hosts the Navy's most important and expensive ships. Because this region is one of only a few sites certified to work on the nuclear propulsion cores of U.S. submarines and supercarriers, it regularly sees these ships for maintenance.

The U.S.'s aircraft carrier deployment schedule dictates that two carriers stay docked for overhauls at any given time.

Hurricane Florence strengthened to a Category 3 storm around 10 a.m. Eastern Time on Monday, when it recorded 115 mph winds. Much of the U.S.'s east coast, including Virginia, has declared a state of emergency as it braces for the storm.

Florence is poised to make landfall early Thursday somewhere around North and South Carolina, and is likely to strengthen as it approaches.