The Naval Academy superintendent announced Friday that "Load the Clip" has been dropped as this year's football team motto, calling it "insensitive" to those affected by the mass shooting in Annapolis last year 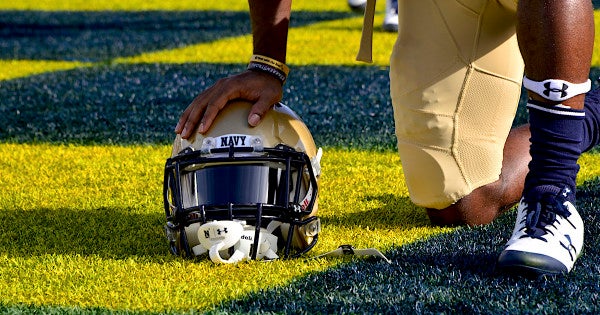 The Naval Academy superintendent announced Friday that “Load the Clip” has been dropped as this year's football team motto, calling it “insensitive” to those affected by the mass shooting in Annapolis last year.

Chosen by senior captain football players for the 2019-2020 season, the motto was changed after reporters from The Capital asked Navy officials about it in the context of a national wave of mass shootings and the attack that killed five people just a few miles from Navy-Marine Corps Memorial Stadium.

On June 28, 2018, a man with a shotgun entered the Capital Gazette newsroom and killed five employees: Gerald Fischman, John McNamara, Rob Hiaasen, Wendi Winters and Rebecca Smith. That same year, in September, three people were killed and three wounded at an Aberdeen Rite-Aid — about 60 miles from Annapolis — before the gunman killed herself.

“It is always my priority, part of my mission statement, for the Navy to be a good neighbor,” Naval Academy Superintendent Vice Admiral Sean S. Buck said in a statement released Friday afternoon.

“The bottom line is, we missed the mark here. The initial internal football team motto selected, 'Load the Clip,' was inappropriate and insensitive to the community we call home, and for that, I take responsibility for, and apologize to not only the Capital Gazette, but the entire Annapolis community.”

The new motto will be “Win the Day.”

The motto was first reported Thursday afternoon by The Capital.

It's been tradition the past several years for team captains to select the motto, an internal slogan used by the players to motivate themselves. Last year's was “For the Culture” and in 2016 it was “We Will” in honor of Will McKamey, who died three days after losing consciousness during a spring practice.

The phrase “Load the Clip” was intended to be a metaphor for daily game day preparation, said Cmdr. Alana Garas, Naval Academy spokeswoman.

In an interview last month with The Capital during the American Athletic Conference Football Media Day, Navy head coach Ken Niumatalolo said he was “leery” of the slogan but also understood the players' relationship with firearms as members of the military.

“Clearly it's a metaphor that speaks to the fact we're going to battle every weekend and when you go to battle you need to have enough ammunition,” Niumatalolo said. “It means you have to be prepared for the fight and that is a process that happens every day.”

Upon learning the motto may be insensitive, the team captains met and proposed the new motto “Win the Day.”

“Our coaches and midshipmen realized that the direction they were headed created sensitivities that were not aligned with the original intent,” Naval Academy Director of Athletics Chet Gladchuk said in a statement.

“Corrective measures were taken immediately and on behalf of the team at large, our sincerest apologies to anyone who was offended. It was a lesson learned and it's important that everything we do at the Naval Academy represents not only appropriate action, but assumed responsibility. We are hopeful we can now put this behind us and 'Win the Day.' “

The change comes one day before before Saturday's annual Navy Football Fan Fest and Media Day at the stadium.

Navy players will sign autographs from 10 to 11 a.m., before meeting fans on the field and taking photos until noon.