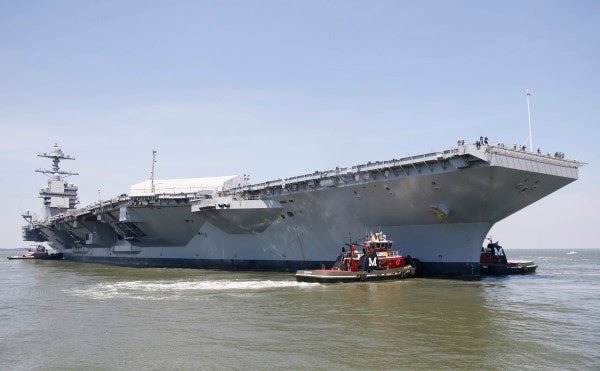 The ship and crew have already completed a pier side dry run of operations in Newport News, Virginia, and will hit the seas later this week to test out its most basic functions.

The Ford, the first ship in its class, promises to bring the Navy unrivaled new capabilities for launching and recovering aircraft at sea, detecting enemies and threats, and generating three times the usual power output to accommodate weapons of the future, such as directed energy lasers and railguns.

Huntington Ingalls first laid down the Ford's keel in 2009 but the ship has met repeated and costly setbacks, pushing the cost to around of $13 billion dollars.

“It’s the first new designed aircraft carrier in 40 years. [There are a] significant number of new, advanced systems that don’t exist anywhere else in the world,” Sean Stackley, then-Navy assistant secretary for research, development and acquisition, told the US Naval Institute's in January.

“It’s not until you bring them all together on the aircraft carrier that you get to test the fully integrated system, and so with all first-of-class ships we have been in a bit of a test-and-fix mode as we go through the test program,” he said.

Aboard the Ford in January, President Donald Trump heaped praise on the Navy's newest carrier, calling it “American craftsmanship at its biggest, its best, its finest.”

The ship is scheduled to be commissioned sometime later this year, according to USNI.