All the deck department sailors assigned to the boatswain’s mates bridge watch teams on the USS Gerald R. Ford are women. They call themselves the Iron 9 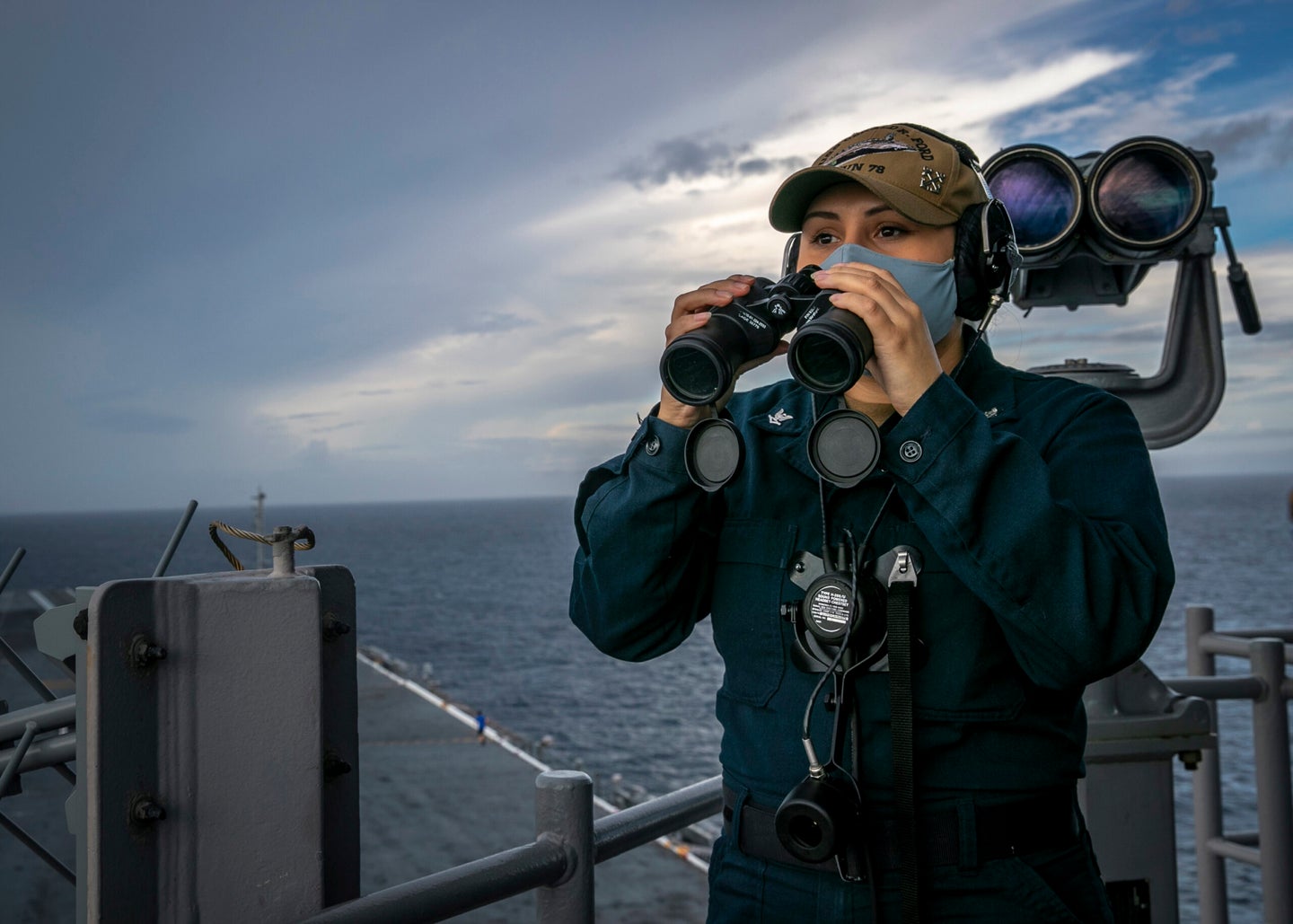 Women have been serving on Navy ships for a quarter-century, although the deck department — especially the bridge watch sections responsible for steering the ship and keeping a lookout for hazards — have remained a mainly male preserve.

That changed with USS Gerald R. Ford’s underway last month — all the deck department sailors assigned to the boatswain’s mates bridge watch teams were women. They call themselves the Iron 9.

“They did great. If there’s a grade higher than ‘A’, that’s what I’d give them,” said Petty Officer 2nd Class Faeline Matthews, the boatswain’s mate who lead the team and whose job is to make sure the relatively young sailors in a bridge watch section are qualified to do the work. “I think it shows what we can do.”

While one of the Iron 9, Seaman Adriyanna Jones, thinks the group’s achievement will influence how female sailors are seen for years to come, she believes they also showed something about the deck department.

“Since we’re on an aircraft carrier, a lot of people focus on flight deck operations and aircraft maneuvering,” she said. “Sometimes deck department is overlooked as an essential asset, but recently there’s been a lot more acknowledgement towards how necessary we are to the ship.”

What a bridge watch section does requires concentration and focus.

At the helm, a post that on the Ford combines what helmsman, who steers the ship, and lee helmsman, who controls its speed, do on other carriers, a sailor has two screens, with dials displaying the Ford’s current direction and trim.

Keeping a 100,000 ton carrier capable of 30 knots on course can be a strain, which is why the drill is for the helm, the bridge messenger and the three lookouts in the section to spell each other. They rotate every hour through the watch.

Not that being a lookout is stress-free. The job involves being alert for hazards — like the small craft that can seem to pop up out of the blue, said Lt. Brandon Carney, the Ford’s assistant first lieutenant, who regularly stands watch as officer of the deck.

Lookouts have phones hanging on cords around their neck so they can call in anything they spot. But except for their phones, orders and reports come in calm, conversational tones across the bridge.

He should know. Carney’s job, when he’s on the bridge, is to make sure orders from the captain or the officer who has the conn — overall direction for where the carrier is going — are relayed and carried out, as he helps coordinate and respond to what navigators, the engine room and sailors on radar watch, working in a compartment behind the bridge itself, report.

In his 15 years in the Navy, Carney said he’s never seen an all-female bridge watch section.

“I think it sends a great signal to the Ford, and to the whole Navy,” he said. “The deck department’s traditionally been mostly male.”

He’s got high hopes for the Iron 9. “It’s basically OJT (on the job training),” he said. “They have specific things they have to do and get checked off on … then BM2 Matthews tests them to be sure they’ve got it.”

And, as far as he’s concerned, Matthews and the Iron 9 are the future of the Navy.

“These boatswain’s mates have the best work ethic I’ve ever seen in my career,” he said. “I can easily see some of these sailors commissioning during their time in the Navy. The sky’s the limit for this crew.”