Navy Helicopters Run Right Into Each Other On A Japanese Runway

Editor’s Note: This article by Gina Harkins originally appeared on Military.com, the premier source of information for the military and veteran community. Navy officials are... 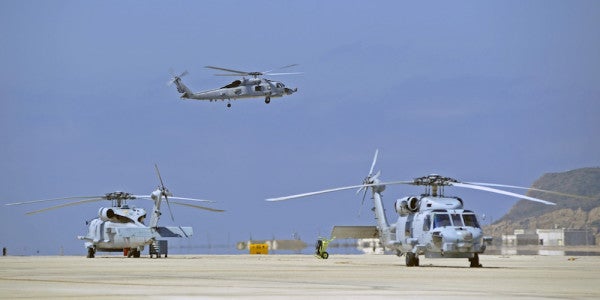 Navy officials are investigating what led two HH-60H Sea Hawk helicopters to run into each other last week on a runway in Japan.

The two utility helicopters “taxied into each other on the taxi ramp” at Kadena Air Base in Okinawa on Oct. 9, according to data from the Naval Safety Center. There were no injuries reported in either aircraft.

The mishap was labeled Class A, which means it resulted in at least $2 million or more in damages.

“There is an investigation ongoing, which will reveal the extent of the damage and what the crews were doing on the ramp,” said Cmdr. Ron Flanders, a spokesman for Naval Air Forces.

The aircraft are assigned to Helicopter Sea Combat Squadron 85. No additional details about the incident were immediately available.

This was the third Class-A mishap involving Sea Hawks in just over two months. In August, a Sea Hawk assigned to Helicopter Sea Combat Squadron 26 made a hard landing at Mountain Home Air Force Base, Idaho. None of the five aircrew members on board at the time was injured.

In July, Naval Helicopter Aircrewman 1st Class Jonathan Richard Clement was killed when a Sea Hawk's auxiliary fuel tank fell off the aircraft and landed on him and another sailor at Naval Air Station North Island, California.

The causes of both of those incidents remain under investigation