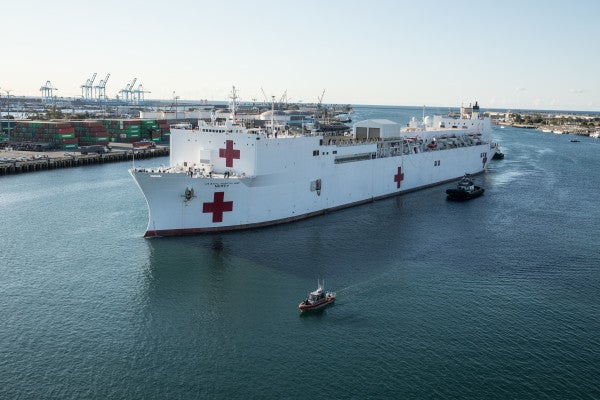 The Mercy, one of two hospital ships deployed to support domestic efforts to combat COVID-19, sailed into Los Angeles on March 27. It has provided medical, surgical, and trauma care to a total of 77 patients since then.

At the direction of the Federal Management Agency and US Northern Command, the ship stopped receiving patients on April 30, a Navy official told Insider Thursday, confirming an earlier USNI News report revealing that the Mercy discharged its last patient Tuesday.

The Navy is working with various agencies “to get the ship underway,” the official explained. The question now is whether the Mercy will go back to its homeport in San Diego or be sent somewhere else.

While the Mercy is no longer receiving patients, 40 members of the ship's medical team are providing support to local healthcare providers, specifically a nursing facility in Orange County.

During its deployment to Los Angeles, at least seven members of the ship's medical personnel contracted COVID-19, but all who fell ill have since recovered and returned to work, a Navy official told Insider.

Both the Mercy and the Comfort were deployed to serve as a “relief valve” for local medical facilities in hard-hit areas by treating patients suffering from ailments other than COVID-19.

“By serving these emergency patients away from the hospitals, beds will be opened up all over the city for those who are infected,” President Donald Trump said in late March.

“This ship can handle a lot of people, so it will open capacity all over the city,” he added. But, the demand for the ship's services was limited.

In an effort to better support New York City, the Comfort, which had been significantly underutilized, was later reconfigured to treat COVID-19 patients. The Mercy, however, was not.

The Comfort, which left New York City on April 30 exactly one month after it arrived, remains in a ready status should a request for its services be received.