The U.S. Navy has been able to substantially decrease the number of hypoxic-like physiological episodes (PEs) pilots in its trainer and fighter aircraft experience, despite not finding a root cause for the problem. Such incidents can take the form of shortness of breath, disorientation and related symptoms 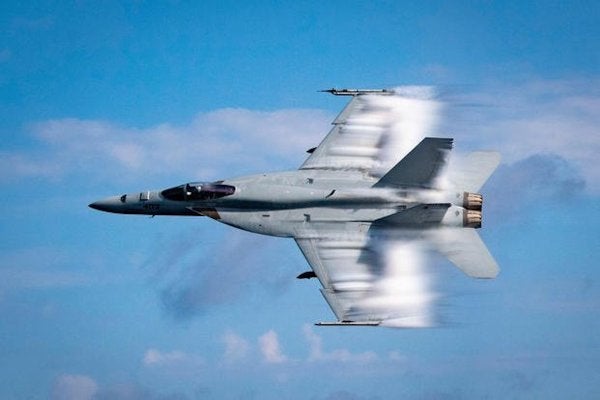 The U.S. Navy has been able to substantially decrease the number of hypoxic-like physiological episodes (PEs) pilots in its trainer and fighter aircraft experience, despite not finding a root cause for the problem. Such incidents can take the form of shortness of breath, disorientation and related symptoms.

Rear Adm. Fredrick Luchtman, commander of the Naval Safety Center and lead for the Physiological Episodes Action Team (PEAT), told reporters Thursday that the service has made progress through a multifaceted effort, resulting in a 96% decrease in the PE rate for the T-45 Goshawk fleet, and a 74% reduction for the F-18 fleet — including Hornets, Super Hornets and Growlers — since a spike in occurrences began in 2017.

“The bad news is that there's no single causal factor that leads to physiological events,” Luchtman said during a roundtable event via phone. “That would have been really nice and very simple. We knew it was a wicked problem, but we really didn't expect a singular cause.”

In 2017, reports surfaced that some 100 T-45 instructor pilots had refused to fly, citing safety concerns with the aircraft. Shortly after, the Navy ordered a temporary pause in T-45 training flights due to the cockpit episodes.

F-18 cases were also on the rise: Documents released with a Navy-commissioned study showed that the Hornet and Growler communities saw a record spike in episodes in 2016, with 125 incidents reported. Officials anticipated another record year in 2017.

The Navy put together two corrective action teams — including medical doctors and toxicologists — to examine the spikes, one for the T-45 fleet, the other for the Hornet fighter family, Luchtman said.

The teams took more than 21,000 air samples from naval aircraft over the course of the 20-month study.

Still, there was no smoking gun, Luchtman said.

“Physiological episodes occur when symptoms arise either during or after flight, and it can include anything from simple air sickness to sinus block to cognitive impairment,” he said, adding that PEs have long occurred in the aviation community and none is exactly the same as another.

In one instance, a pilot could experience hypoxia-like symptoms from lack of oxygen. Another PE could be related to pressure change in the cockpit, which is controlled by an environmental control system, or ECS.

An early speculation was that the aircraft's onboard oxygen generating systems, or OBOGS, had been deteriorating over time — leading to disorientation, shortness of breath, confusion and wheezing, among other manifestations — because of tainted air.

“But after extensive testing, this theory has been disproved,” Luchtman said.

OBOGs “uses an absorption process — in our case, zeolite [minerals] — to remove nitrogen from the air,” he said. The teams consulted with specialists at Johns Hopkins University, who confirmed that the air coming from the OBOGS was “extremely clean,” he added.

Yet the teams found that T-45 pilots were more likely to experience an oxygen-related incident, while F-18 pilots were encountering both pressure change and oxygen anomaly events.

The T-45 team observed flight profiles in which the OBOGS concentrator wasn't putting out enough air, Luchtman said, prompting a change to the system's inlet pipe so it could pump out more.

For fighter pilots, “even under benign conditions, the act of breathing highly concentrated air from a closed-loop system while encumbered by bulky flight gear in a cramped cockpit is not easy,” Luchtman said. “In the dynamic environment of a fighter cockpit, we also add to the equation temperature variance, exposure to continual changes in Gs and pressure, all while managing an overwhelming amount of sensory input.”

A pilot can also be affected by improperly fitted or worn flight gear or by malfunctions in the oxygen mask itself.

Related: The Navy and Air Force are joining forces to fight hypoxia

Maintenance was also an issue. Previously, ECS components were replaced only when they failed. The Navy has now established life limits for the environmental control system, especially if maintainers observe continued wear. The change has been effective, particularly in the legacy Hornet fleet, Luchtman said.

“This … is a tremendous paradigm shift in the way we do maintenance,” he said. “We can actually identify parts that are sub-performing, replace those parts and prevent the PE from ever happening.”

So far, it's led to an 88% reduction in pressure-related PEs for older-generation F-18s, he said.

With added maintenance and the addition of HhART in 2019, all F-18s have seen an 80% decrease in pressure PEs, according to the Navy.

But this doesn't mean the end of physiological events, Luchtman said, adding that work will continue.

The Navy will soon begin installing the cockpit pressure OBOGS monitoring system (CPOMS) in all its F-18s, which will record oxygen concentration levels and pressurization data from the cockpit. It will permanently replace the recording sticks. The system will alert pilots if something is amiss during a sortie, Luchtman said.

The fighters will also get new OBOGS concentrators that will allow the Navy to “electronically schedule oxygen delivery as a function of altitude, which is a goal we've been trying to get to for a long time,” he said.

The Navy is exploring 30 more interpretative studies that will examine new technologies, as well as human response and how it relates to physiologic performance in the cockpit.

“I'm very proud of the work that the root cause corrective action teams did. But having said that, there's still a tremendous amount of work that needs to be done,” Luchtman said.